For OBRA’s Wy’easting Challenge, today I rode 13 repeats of Montgomery street from the old PFD No. 1 Station to Council Crest. 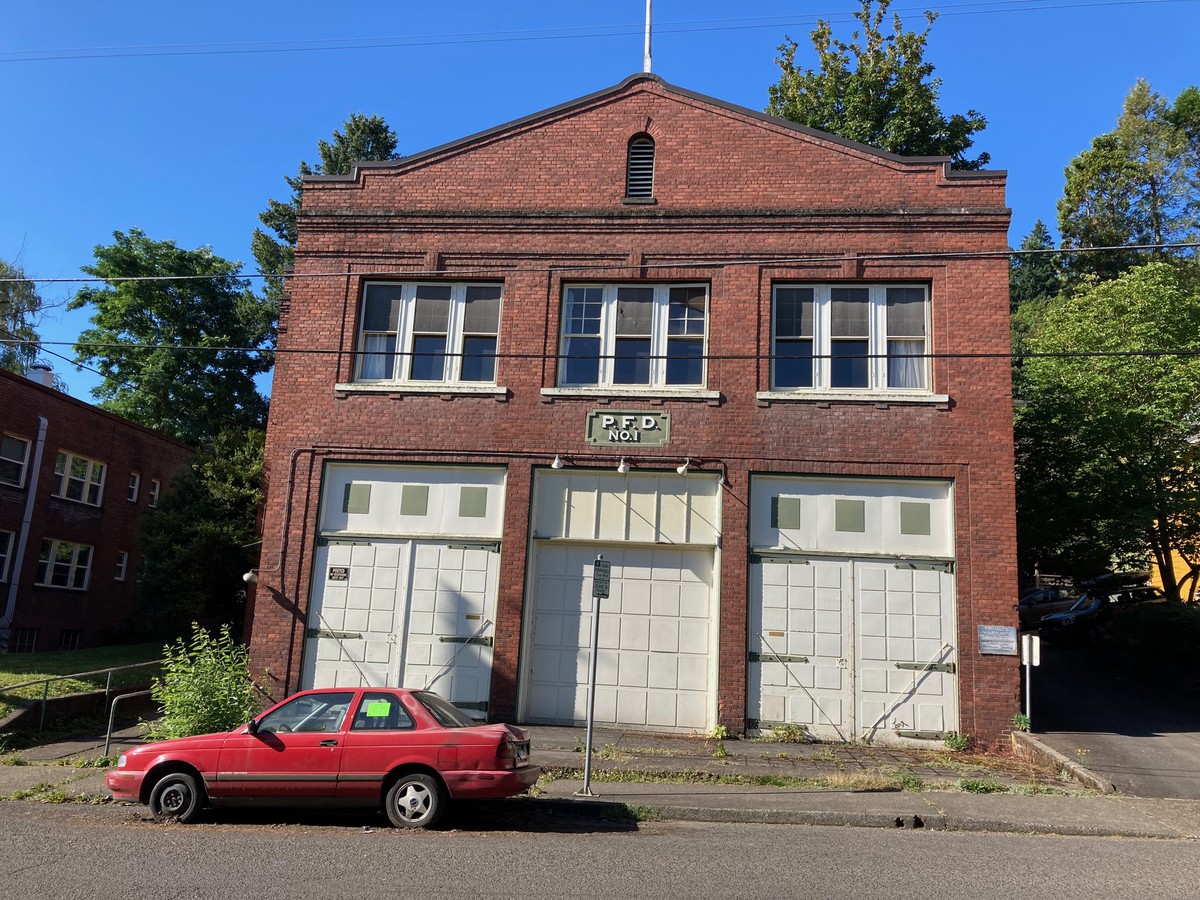 I knew I would lose count of my laps. I kept 13 rubber bands on my left wrist, every time I reached Council Crest I moved one to my right wrist. At every summit I took a picture of the rubber bands and also Mt. Hood. I updated Can You See Mt. Hood from Council Crest? with all 13 observations from today. On Lap 5 or 6 it occurred to me this would have been fun to livetweet but I didn’t. 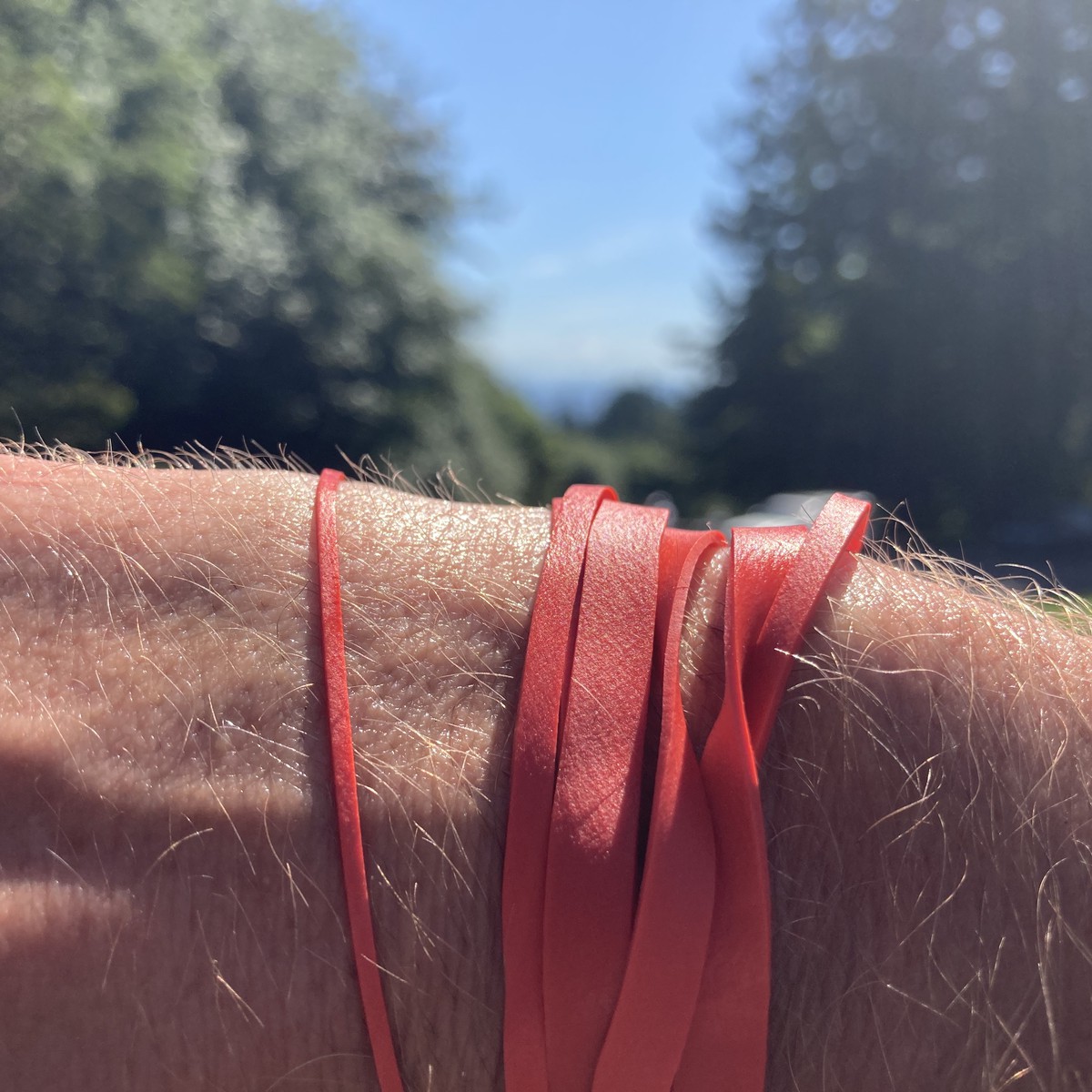 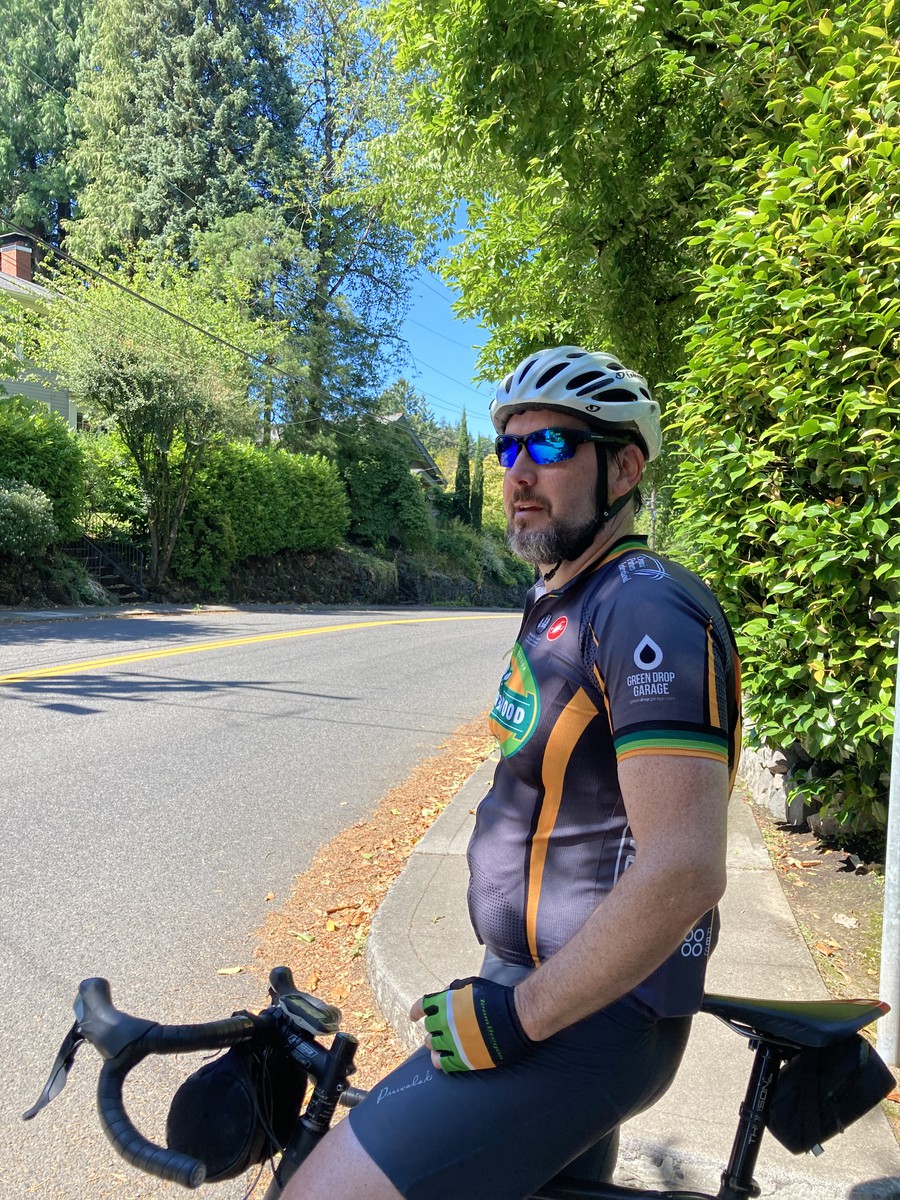 Then at noon Jenny and Orion met me at the firehouse and Orion rode the last four repeats with me. 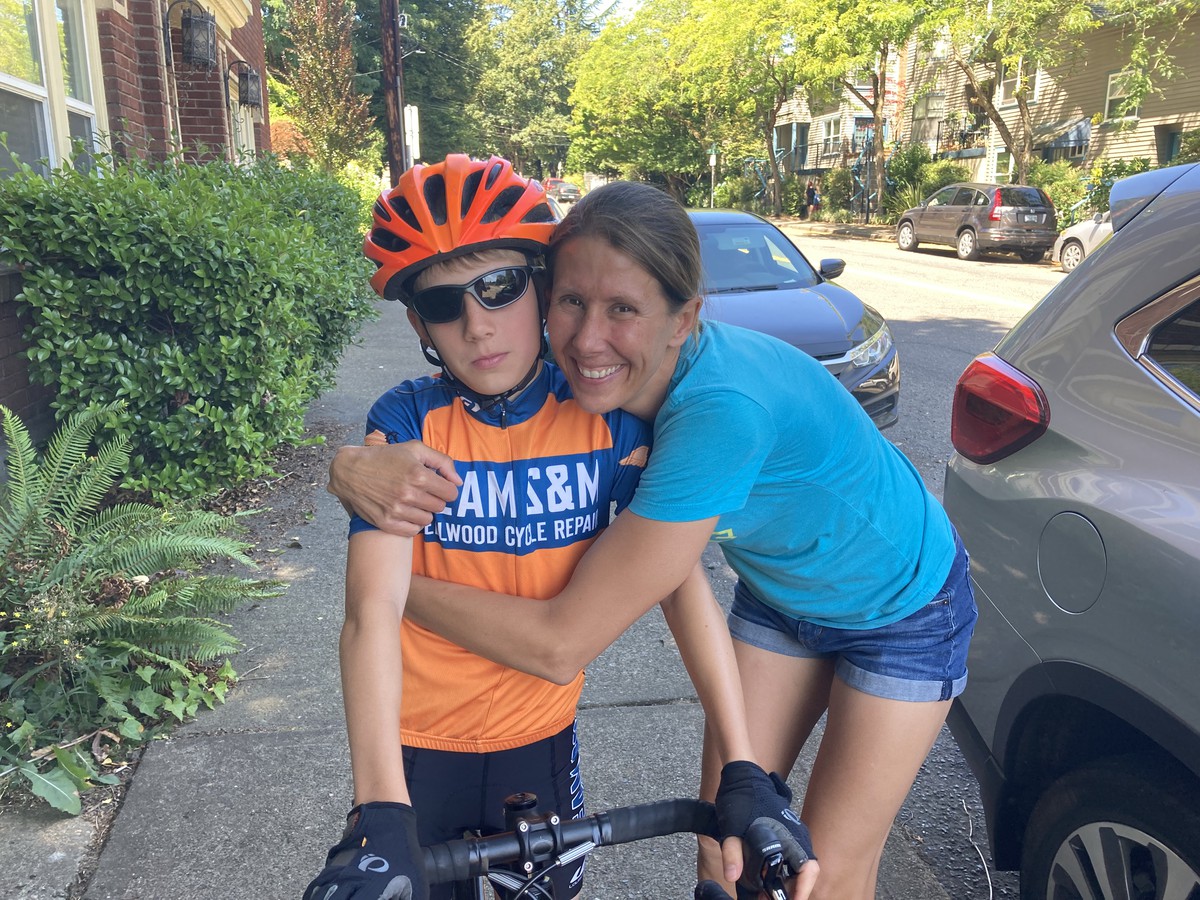 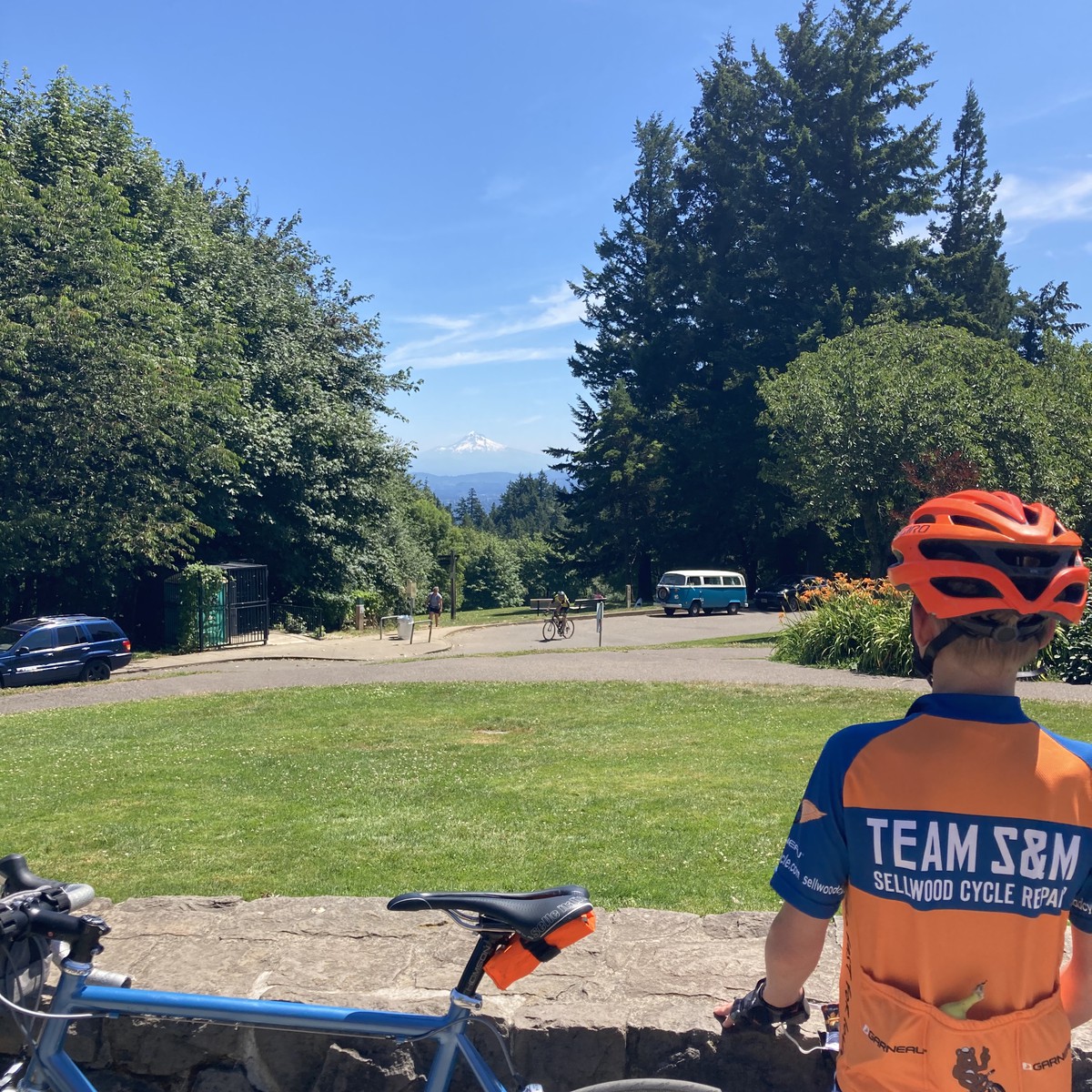 The day started not-cool but not-warm. It was hot by 11am and when the sun got overhead after noon it became really hot. I wore a jersey and my buff (as a covid barrier) all day. The only insulation I varied was my cap and gloves: off for the climb, on for the descent. 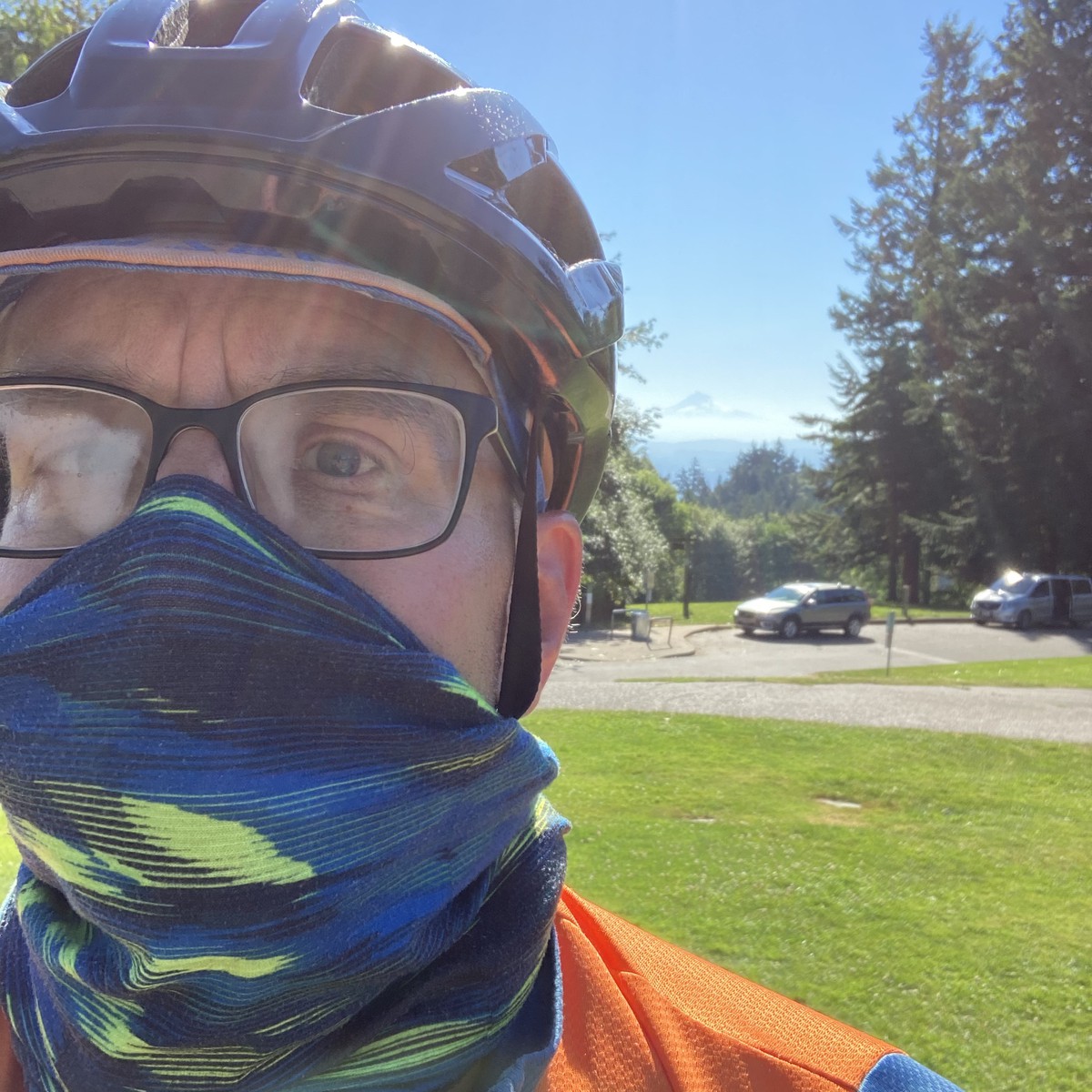 Orion drank more than two liters of water on his four repeats! When we reached the firehouse after lap 13, we rode the 5mi home down the westside greenway. 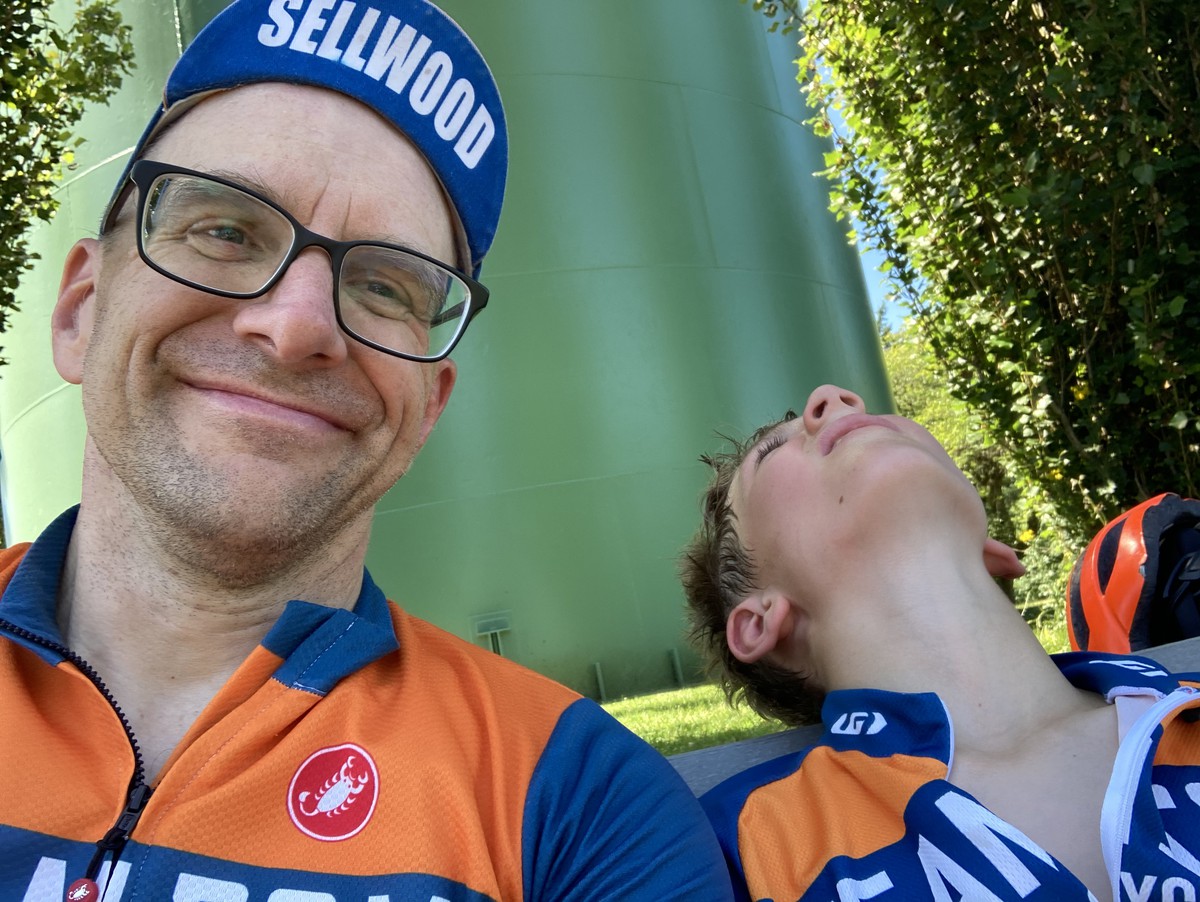 The park was empty at 7am as it almost always is but it filled up rapidly after 8am. It was a good day to see all four volcanoes (Mt. Rainier, Mt. St. Helens, Mt. Adams, Mt. Hood). This is the only place I know of in Portland where you can do this!

From 8am until about 11am, there was a large group of well-dressed people holding some sort of meeting at the Crest. My guess was a wedding but I couldn’t tell who the bride and groom would have been so that’s probably not a good guess. It may have been a spiritual ritual of some kind. They were singing a very catchy song in a South Asian language I didn’t recognize. Thom joked that he wanted them to teach it to him so he could chase out the earworm.

I felt strong all day. I didn’t push the pace at all, I doubt I was above Zone 2 for more than an hour total. Orion and Thom did a good job pacing me at times when I might have blown myself out unnecessarily. At one moment early in the day I was passed by a sharp young rider who sprinted past me on lower Montgomery. I caught him on Greenway before the top and was reminded of the old joke about the young bull and the old bull.

This was probably the perfect route for this kind of repeat. The only part I really dreaded was lower Montgomery below Vista, and that only because of the (mild) traffic. On the entire route there are no stoplights and only a few stop signs. Car traffic is light. The grades are steady, they average 6% on the entire climb but usually alternate between 8% and flat. That’s just enough grade that standing on your pedals can be profitable, but is not mandatory. And it’s not such a low grade that you feel like you’re slogging through oatmeal. There are only two sections (lower Montgomery, and most of Greenway) where you can see more than a few blocks ahead. This is important for psychological reasons. A curvy climb is broken into many small climbs so you always have a carrot just out of reach. On a straight climb the carrot is so far out of reach you can get discouraged.

I thought the ride would be tedious but it wasn’t. I was worried it would make me hate my favorite hill but it didn’t. I love this hill like I love a friend.

I have made 1000 observations of Mt. Hood from Council Crest

I ran the numbers