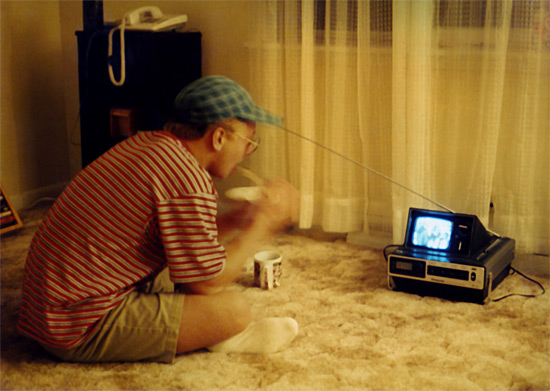 This photo tells me everything about being 22 years old, one year out of college, flat broke, living in an alley apartment with my friend Greg. I think Greg took it. Journalistic in composition, it resembles a still life in its expository qualities. Every element tells a story.

Although in this case, “supper” is also “breakfast.” I’m probably a few minutes out of bed, about 7:30 pm, gearing up for the night shift at Kinko’s. Note the blur between the bowl and my mouth. You might think that’s due to the long exposure, but check out the television image. It’s out of focus, but it’s not blurred with motion. That’s how quickly I eat breakfast.

I’ve written about this television (the best set I’ve ever owned) elsewhere. It was my grandmother Stehl’s former set, and you had to watch it with two hands. At 72 dpi you may have trouble making it out, but I’m watching Star Trek: The Next Generation. Captain Picard is on the left side of the screen, facing back and to the right, speaking to Counsellor Troi and someone else. What kind of warship has a full time psychologist? And why does she sit on the bridge? Do they do this in the present-day navy?

Greg and I owned almost no furniture. Most of my possessions remained in storage in my parents’ basement. I was between: between jobs, between girlfriends, between college and grad school, between childhood and adulthood. We didn’t decorate, any more than one decorates an elevator. The curtains came with the apartment. We covered the other windows with sheets.

The room had a fine Zen feeling, especially in the mornings. It was easy to think in that room.

I bought the telephone the week my grandmother Souders died, October, 1991, after destroying my old phone in an argument. I was arguing on the phone with my then-girlfriend. She didn’t know (and probably never knew, unless she reads this page now), but while my grandmother was in the hospital I was fooling around with a different girl, who lived in my dorm. The week Grandma died, the other girl and I, with much drama, had decided to cool it. This was a lot of stress for one week. I was pretty upset, and taking it out on my girlfriend. As I recall, she hung up on me mid-sentence, typical behavior for college girlfriends, I suppose. I threw the phone (a dark red “princess” model) to the floor, destroying it. The next day I drove to Target and bought the object we see here: a Panasonic with call waiting, speed-dial, redial, the works. It was a pretty good phone; it followed me to Oregon, but wound up with my first wife in the divorce. It may still be functional, who knows? Around the time of my divorce, I smashed another phone to the floor during a drunken long-distance argument with my first wife. My love life has been hard on communications equipment.

This is clearly a man with little regard for what people think of his appearance. I made striped shirts my college uniform. I probably had a dozen. I think these are my pajamas, which were probably also the clothes I wore before I went to bed at 10 or 11 am. But a plaid hat? My hair started thinning that winter and I was self-conscious of it, even at home.

When I finished the cereal, and Star Trek, I likely put on a pair of khakhi pants and my chambray Kinko’s shirt and rode my bike to O’Rourke’s. I probably drank a cup of coffee while my friends made a dent in a pitcher of Old Style, then I rode a few more blocks to Kinko’s.

I don’t think I own any striped shirts at the moment.

The sharp-eyed viewer will just make out a can of Old Style on the window sill, at far right, behind the curtain. I know from hard experience that the label reads “Old Style,” those of you on the coasts unfamiliar with the label will have to take my word for it. Greg and I had a party every other month or so, ad hoc affairs where we’d call a few people, who’d call a few people, etc. Apartments without furniture are ideal for parties.

I don’t know whether this can is a party artifact or whether one of us simply left it on the sill after dinner. I drank Old Style with every meal, so long as the meal didn’t consist entirely of breakfast cereal.

I remember everything I wanted at that point in my life: to live in a hip city Out West, to associate with creative people, to drink good coffee, to mess around with computers, to have a cool girlfriend, to ride bikes all the time, to exercise my brain for a living.

At this moment, eleven years later, I’m sitting in Stumptown Coffee in Portland, Oregon, underneath my pal Jessica’s paintings, updating my website over the free wireless network. In a few hours, Jenny will come home, we’ll go to the gym; tomorrow I start a user interface design contract — the best kind of work I could ever imagine. And I ride my bike all the time.

What’s the opposite of nostalgia? Do we have an English word that means “a longing for something in the future?”

There’s no comment section but you can send me an email: [my first name]@[this domain]