Last week, I rode my bike through Spring Garden park (on accident, didn’t realize it was closed for construction. The construction crew was very jolly about my trespass). Jenny and I used to live about a block away from this spot umpteen years ago. BEFORE it was a park! It was just a grassy hillside where everyone took their dogs. 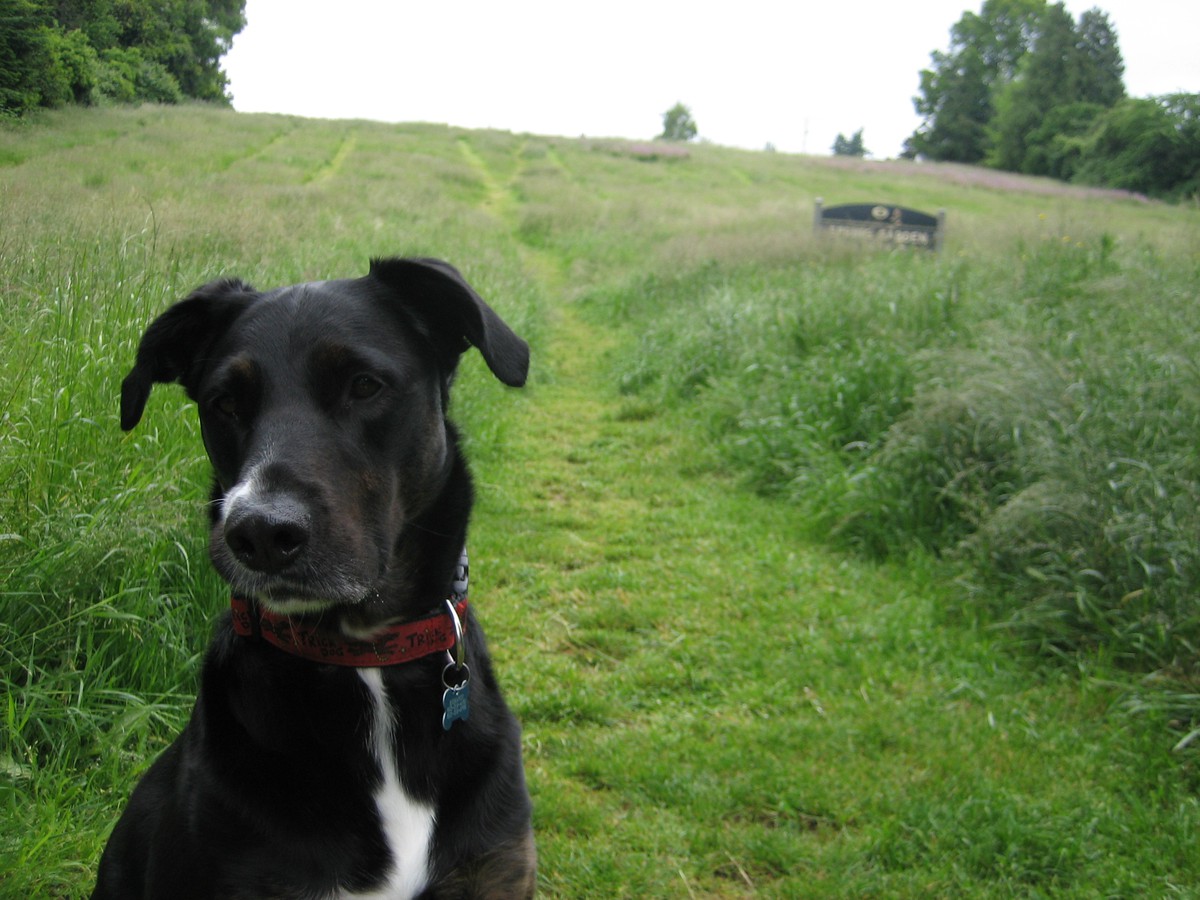 The neighbors took care of this park collectively and spontaneously. We all managed a garbage can in the middle of the hillside. We took turns supplying rolls of grocery produce bags for bagging dog poop. About twice a year the city would mow this lot with a huge tractor mower. I think the land was deeded to PP&R in the 70s or 80s but they were sluggish about developing it. Most of the neighbors preferred it that way. We had a Thing about the “Rural feel” of the neighborhood which, truth be told, is smack dab in the middle of the city, about 3 blocks away from Highway 99. 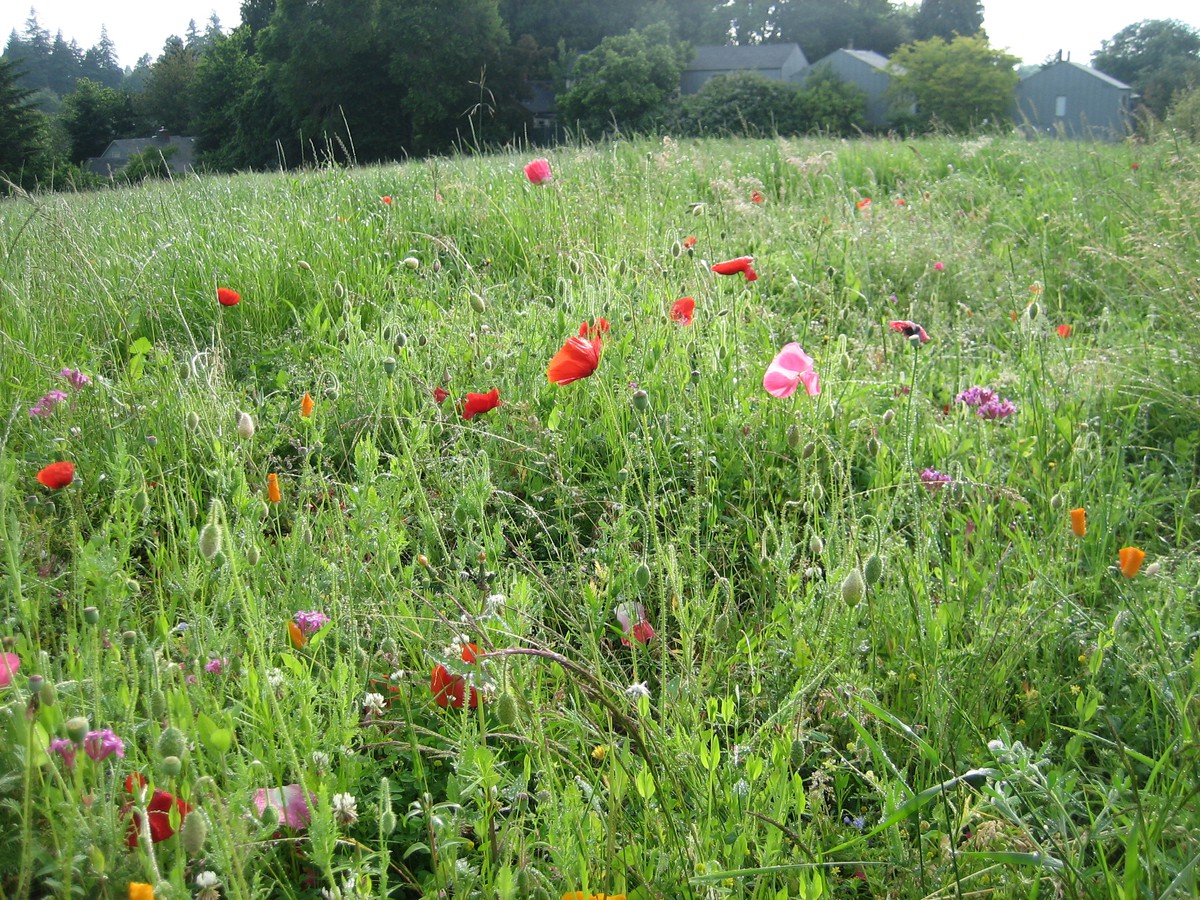 One of the neighbors seeded the top of the hill with poppies. Photo taken 2006.

About ten years ago a city parks dept. sign went up, and the surrounding barbed-wire fence went down. The city drew up a wetlands plan and marked off a large patch of lupines for preservation. We were told at a neighborhood meeting that this would be the extent of development. I gave feedback at a town hall about keeping the park undeveloped. But this was around the time we moved away from the immediate vicinity so I stopped paying close attention. Maybe three years later the city fenced off the wetland at the bottom of the hill and installed a nature playground at the top. 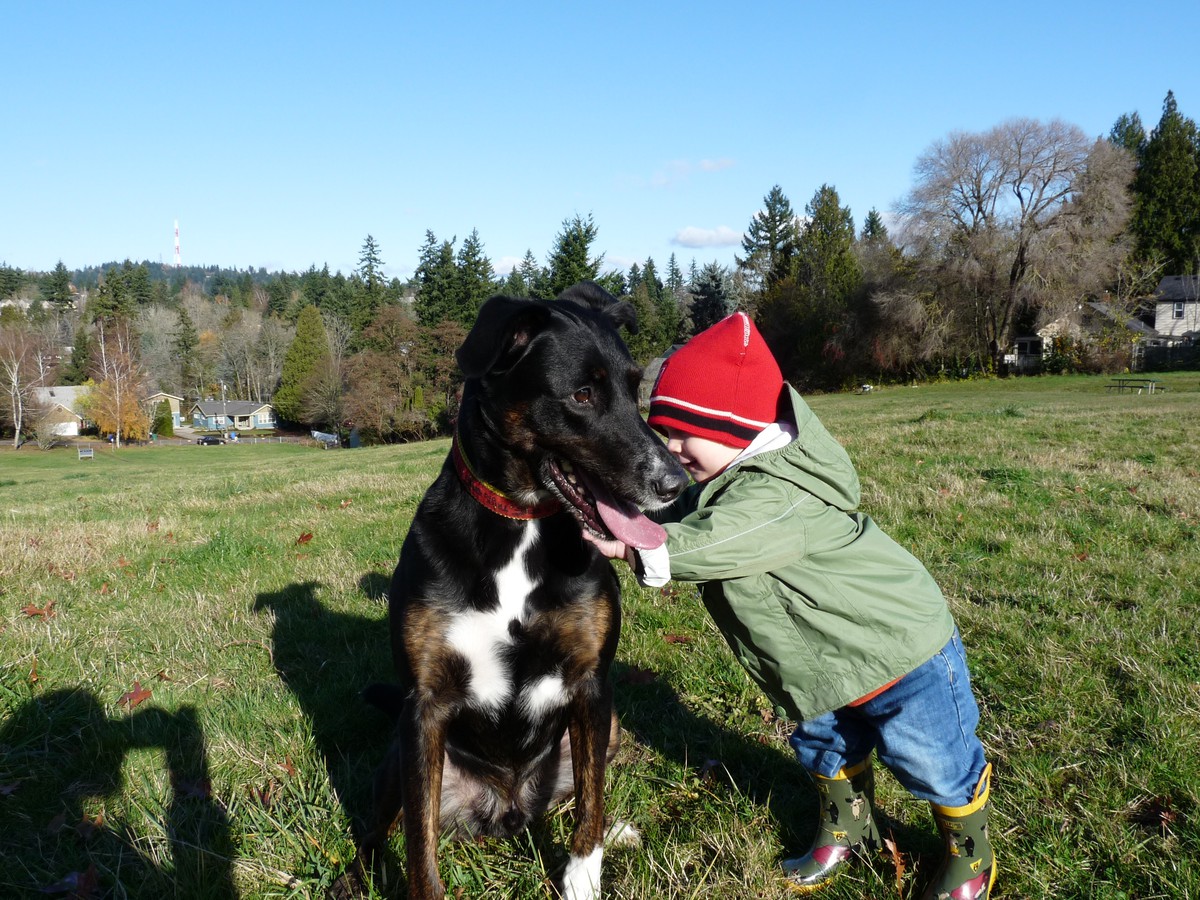 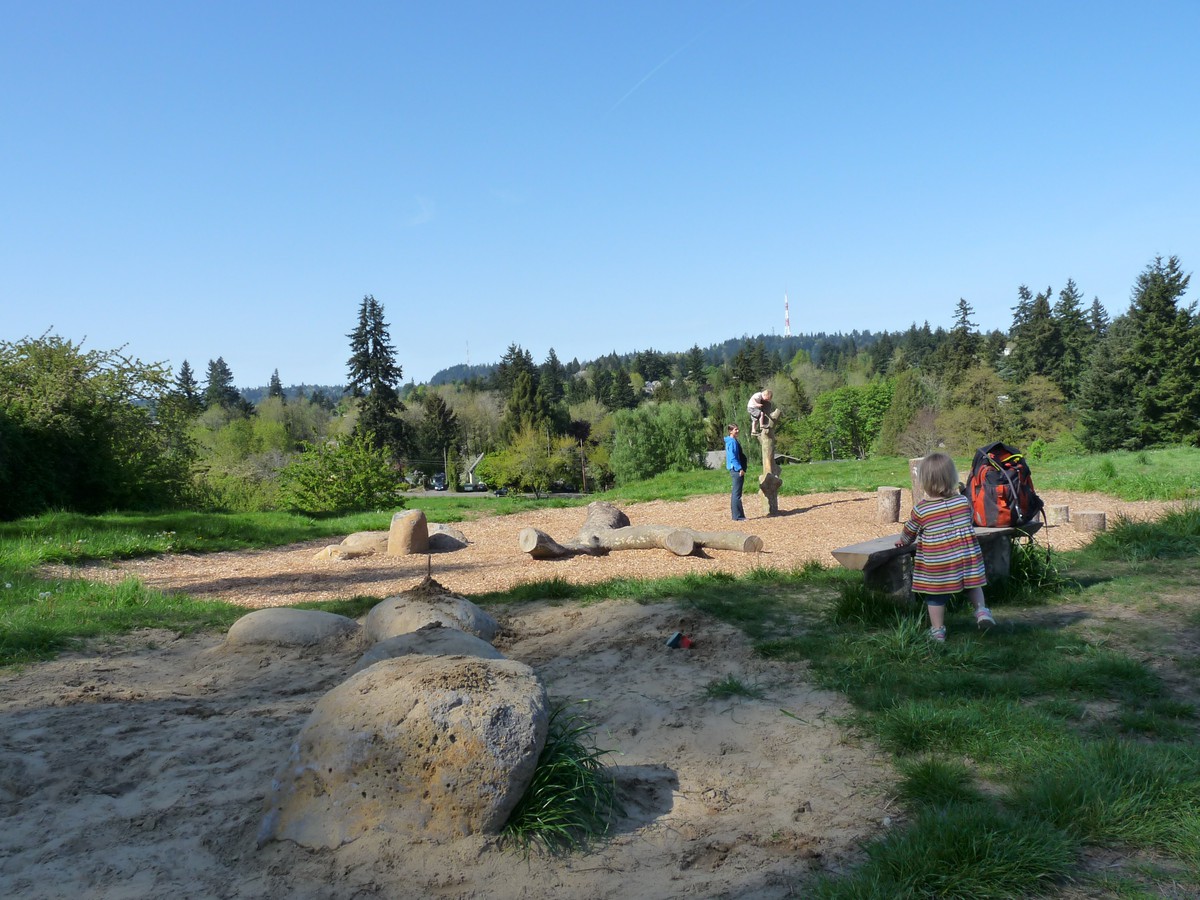 The past decade has seen a lot of development between the park and Highway 99. Where a few small houses and parking lots once stood, now there are nice new apartment buildings and condos. There are thousands more people living around this meadow than there were in 2006. The half-ass nature of Spring Garden Park — and the collective way we cared for it — probably couldn’t keep up with increased usage. It was being loved to death. I shudder to think how much dog poop was accumulating in the marsh at the bottom of the hill. The sunny meadow I loved was long overdue for improvement.

So here’s the punchline. There’s no way the new park is not better than the old “park.” It will serve hundreds or thousands of people much better than the old grassy field served maybe a few dozen of us. But Change Makes Old People Sad which is why I’m sad.

I miss the old grassy field on a hillside with a marsh at the bottom.

I miss the undeveloped meadow secretly in the middle of the city.

I miss a city that still had forgotten, overgrown spaces inside it that we could call “rural.”

Or maybe I just miss being 35 years old… newly wed, taking my puppy (and later my toddlers) to the sunny swampy meadow with the other beloved neighborhood puppies and toddlers.

I had the same feeling when the new Sellwood Bridge was finished. Not nostalgia for the old bridge (it was pretty universally agreed to be the worst bridge in Portland) but for the grotty overgrown connection about a half mile long, between its sidewalk and the westside greenway trail. This connection was entirely improvised: a muddy path through brambles. At several points you had to travel on a seldom-used railroad. It was kind of adventurous. 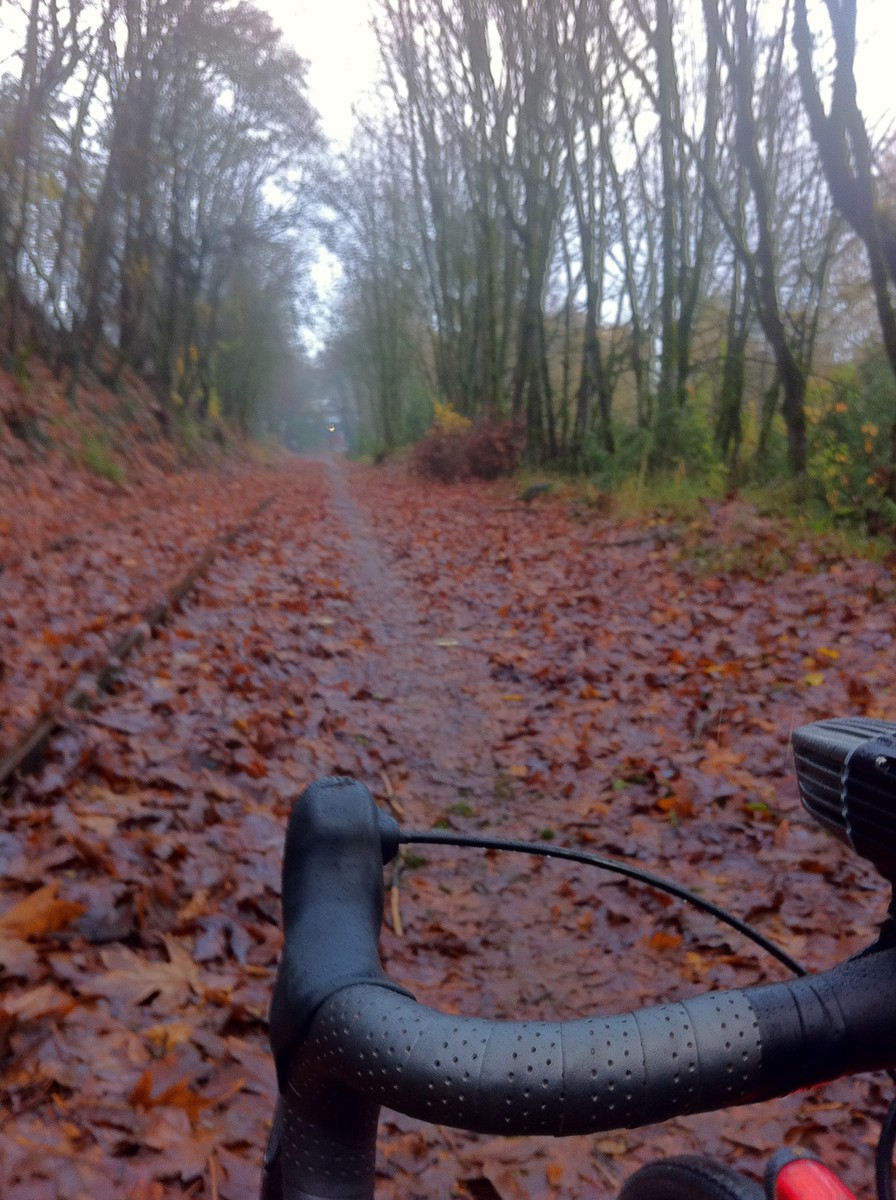 This is how the Westside Greenway used to connect from Macadam Bay to the Sellwood Bridge ca. 2009. 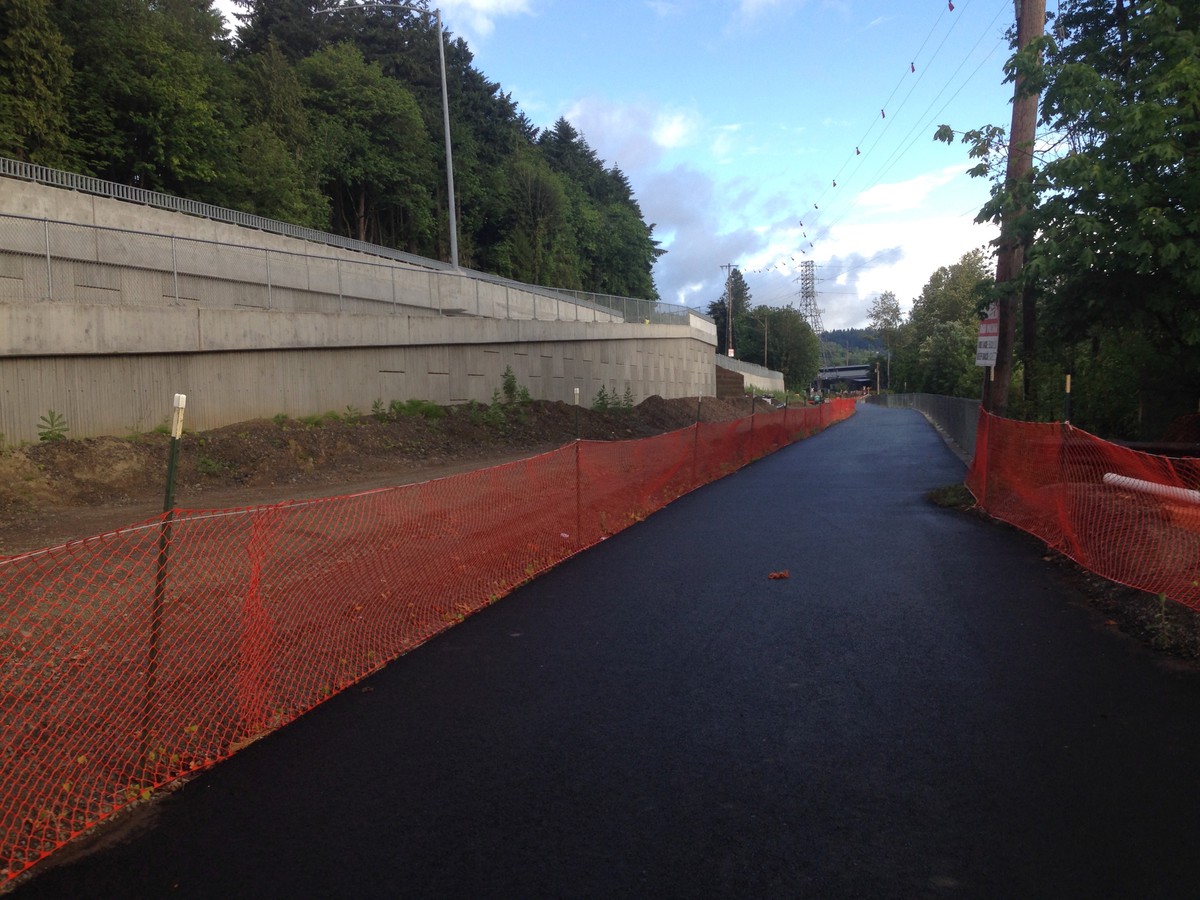 This is what the same path looks like now.

Listen: I even miss the overgrown ruins of Tequila Willie’s (AKA Who-Song and Larry’s) which used to be a riverside restaurant but was abruptly demolished sometime before the early ’00s (I think after a fire or a flood), leaving…yes, a weedy, swampy meadow. Containing the ruins of a cheezy Mexican restaurant. 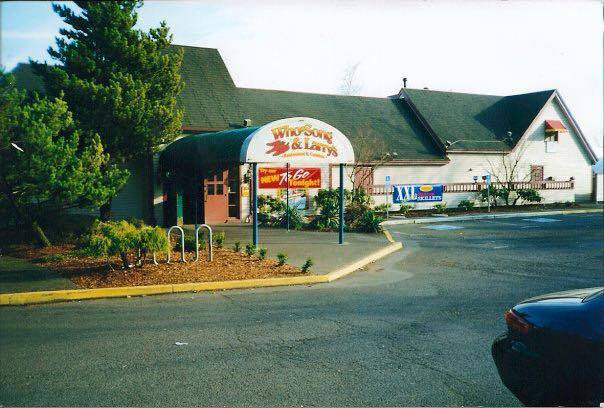 The few people in the neighborhood who remembered this place called it “Tequila Willie’s” but the sign said “Who-Song and Larry’s”. Photo maybe mid-90s, from the Tequila Willie’s Portland Oregon Facebook Page 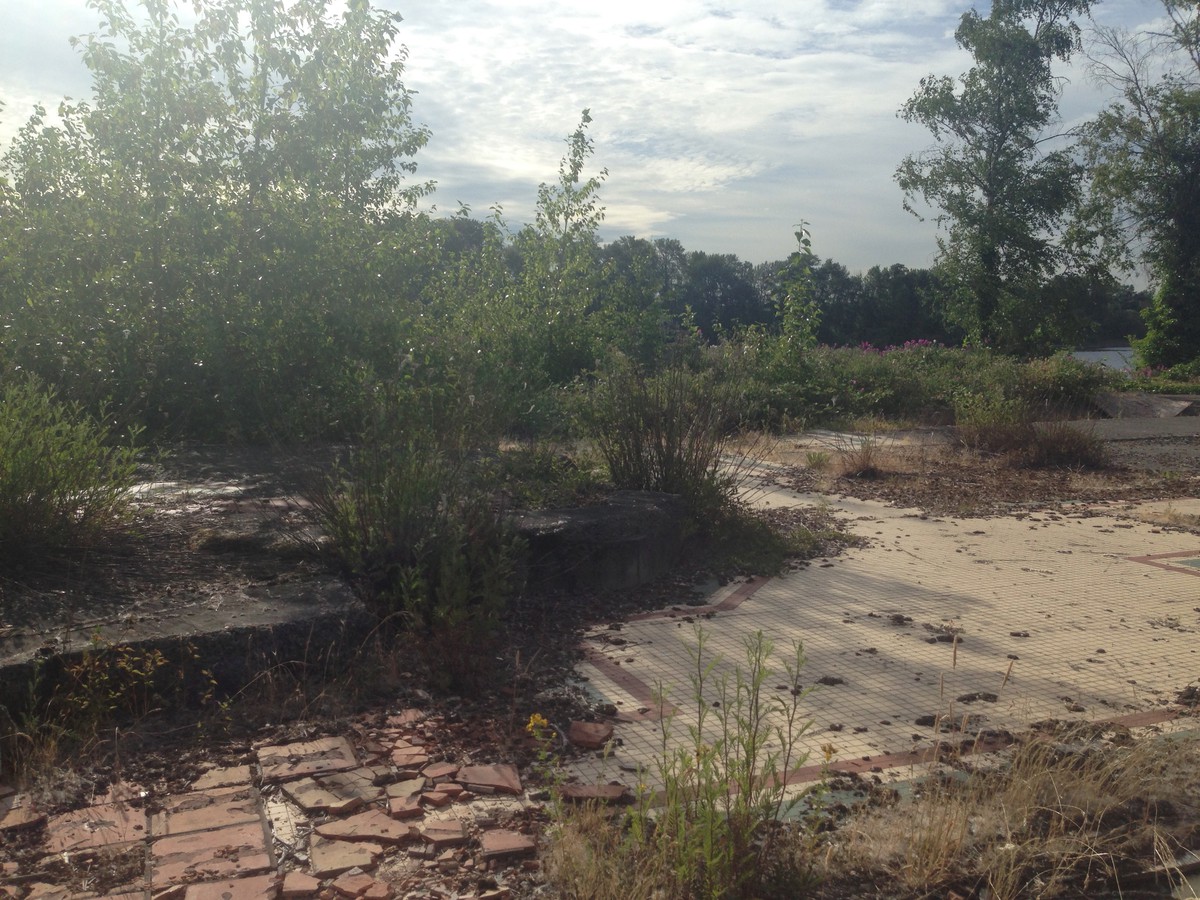 Then about two years ago they built some really lovely new apartments on the lot. So RIP ruins of Tequila Willie’s. 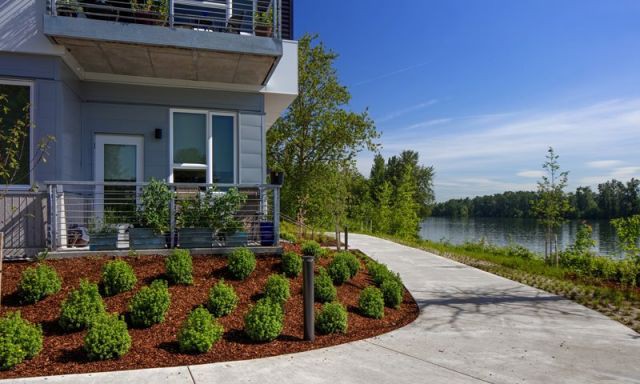 The same lot, 2018. Photo from sanctuaryportland.com

To be clear: I don’t miss Tequila Willie’s. I think I ate at that Tequila Willies a few times in the ’90s. Maybe. That’s how much I treasure the memory of Tequila Willie’s, the Restaurant. No: I miss the ruins of the restaurant. I trespassed there a few times out of curiosity, because it’s along one of my commutes, in a spot that was especially dark and forgotten. I loved those ruins mainly because I was used to seeing them. I was attracted to their aura of faded romance. But those ruins served literally no one, it wasn’t even useful as a place for squatters, or as a dog toilet. It was a rubble-strewn vacant lot with old uncovered grease traps full of malarial waste water.

The lesson here is that people get nostalgic for the most worthless, run-down stuff.

If you’re in a conversation where an Old Portland Hand starts ranting for preserving dive bars or muddy old trails or twee Alberta bungalows, remember:

Old people miss the dog toilet that used to be under this cool new playground.

Say this to yourself whenever someone (including yourself) starts saying Preserve Neighborhood Character or Make Something Great Again. Nostalgia is a dangerous impulse. All the fear and resentment in the world won’t make time flow backwards. And maybe the thing we want to go back to wasn’t all that great to begin with. Maybe it was an abandoned lot full of dog poop.

I am a (small-c) conservative person who hates and fears change, which should be obvious from my affinity for weedy vacant lots (and also manual transmissions, steel bicycle frames, and drip coffee). There’s definitely value in standing astride history shouting “stop.” I wish, for example, we had been a little more considered about building the twenty-first century economy around advertising delivered to GPS devices in our pockets.

But old people, by definition, won’t be living in the future. Our opinions about it are going to be colored by an irrelevant emotion that won’t ever be defeated with reason. We miss the dog toilet that used to be under this cool new playground. Don’t get snookered into debating the value of dog toilets. The world might need the playgrounds more.

In the process of transferring this essay from TinyLetter, I discovered this photo apparently from 1996: 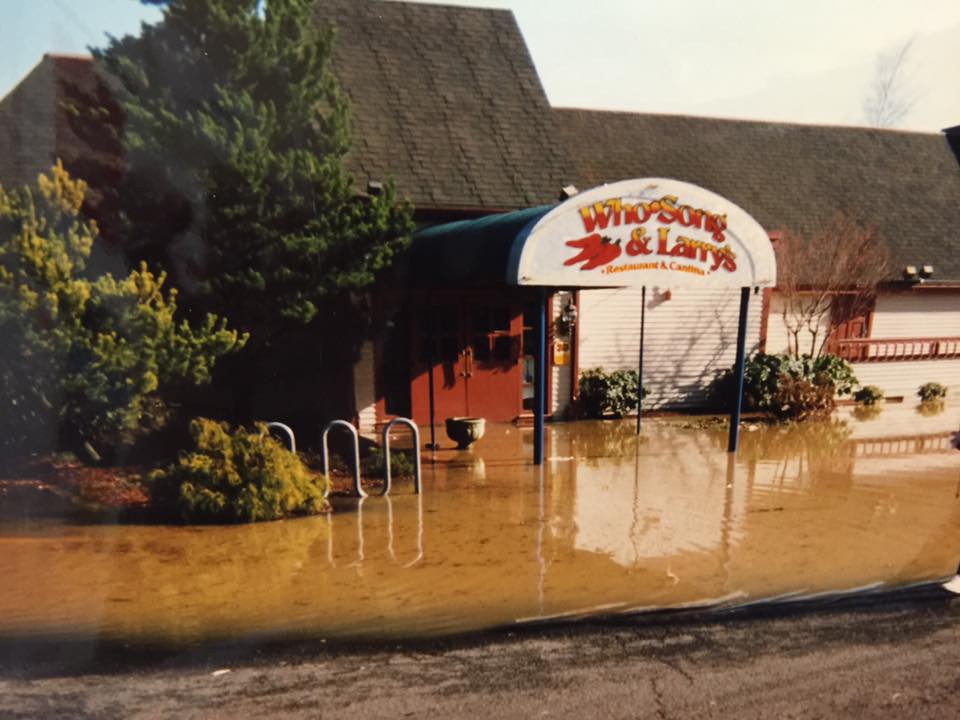 So there’s some evidence that Tequila Willie’s AKA Who-Song & Larry’s was fatally damaged by the large Willamette River floods during the winter of 1996. That was before I moved to Portland, so it’s likely that my memories of “eating at Tequila Willie’s” are probably not accurate.

Which adds another layer to this story: