A full week ago I thought to make the weekly grocery run a few days early. The annual Snowpocalypse was coming.

I also tried to set my kids up for disappointment:

By Friday morning I was proven wrong. 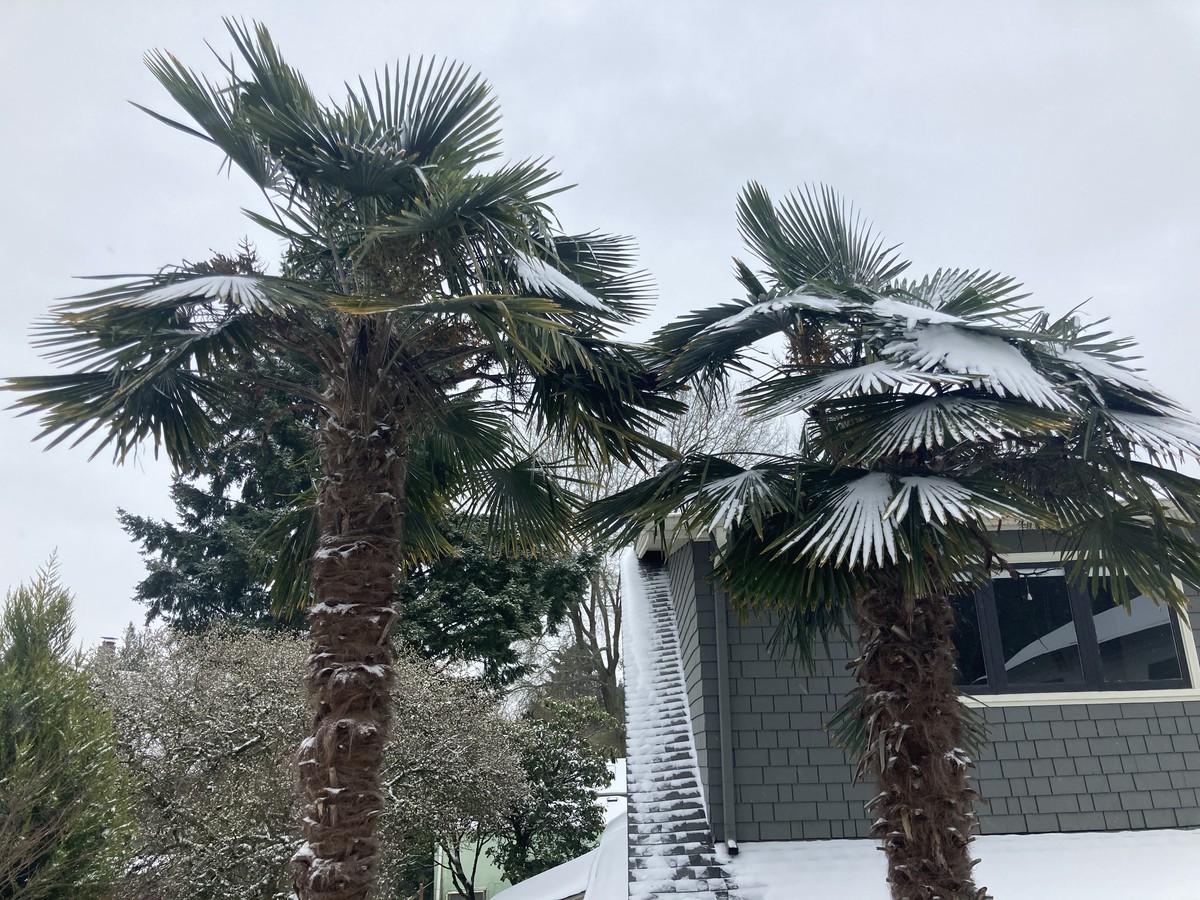 Saturday was Winter Wonderland in the way it almost never is in Portland. 3 to 4 inches of delightful fluffy stuff and temps just below freezing all day. Sledding and snow trail running and neighbors on skis (we don’t have skis) and I put zip ties on the MTB wheels & had some fine snow riding. (I regret now not riding up to Council Crest on Saturday). 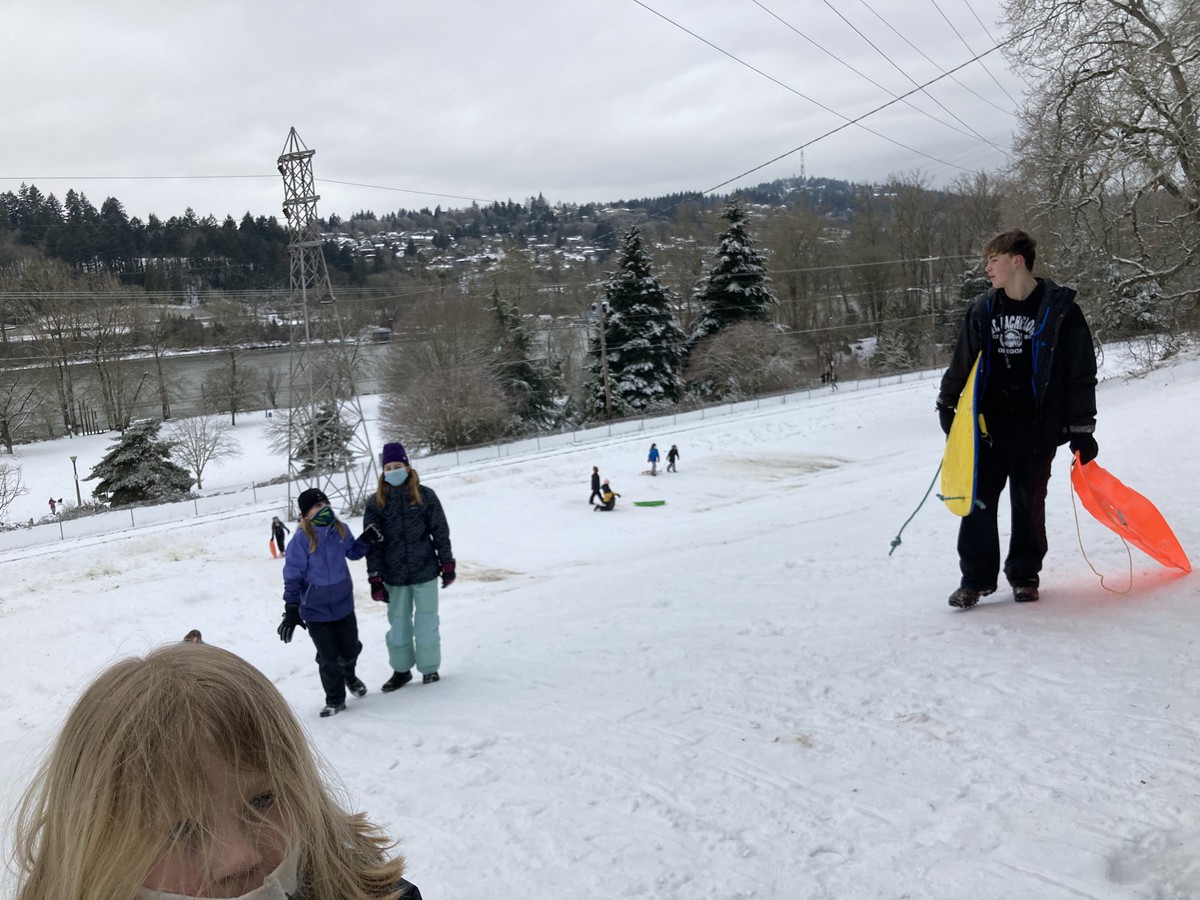 Our local sledding hill on the best snow days is hard on sleds. This was even icier & faster than usual. 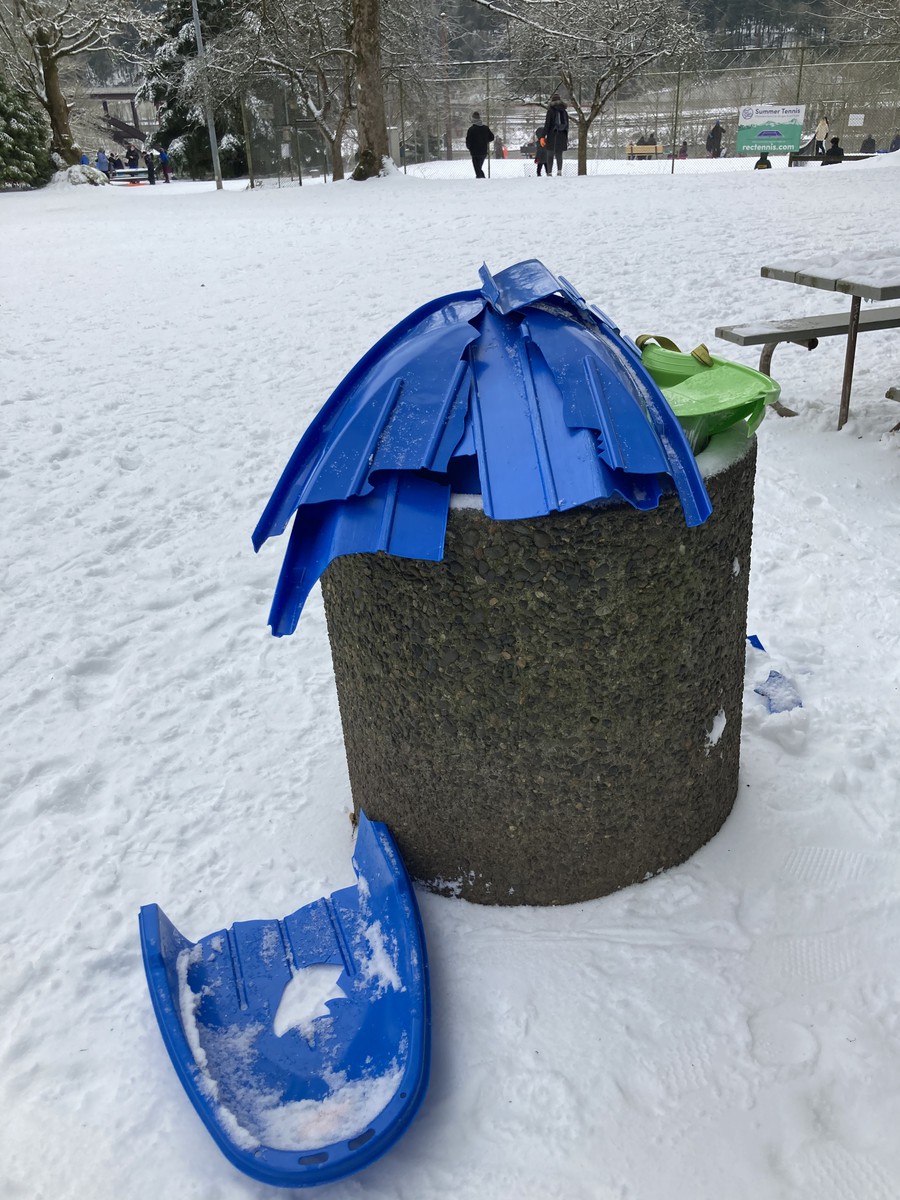 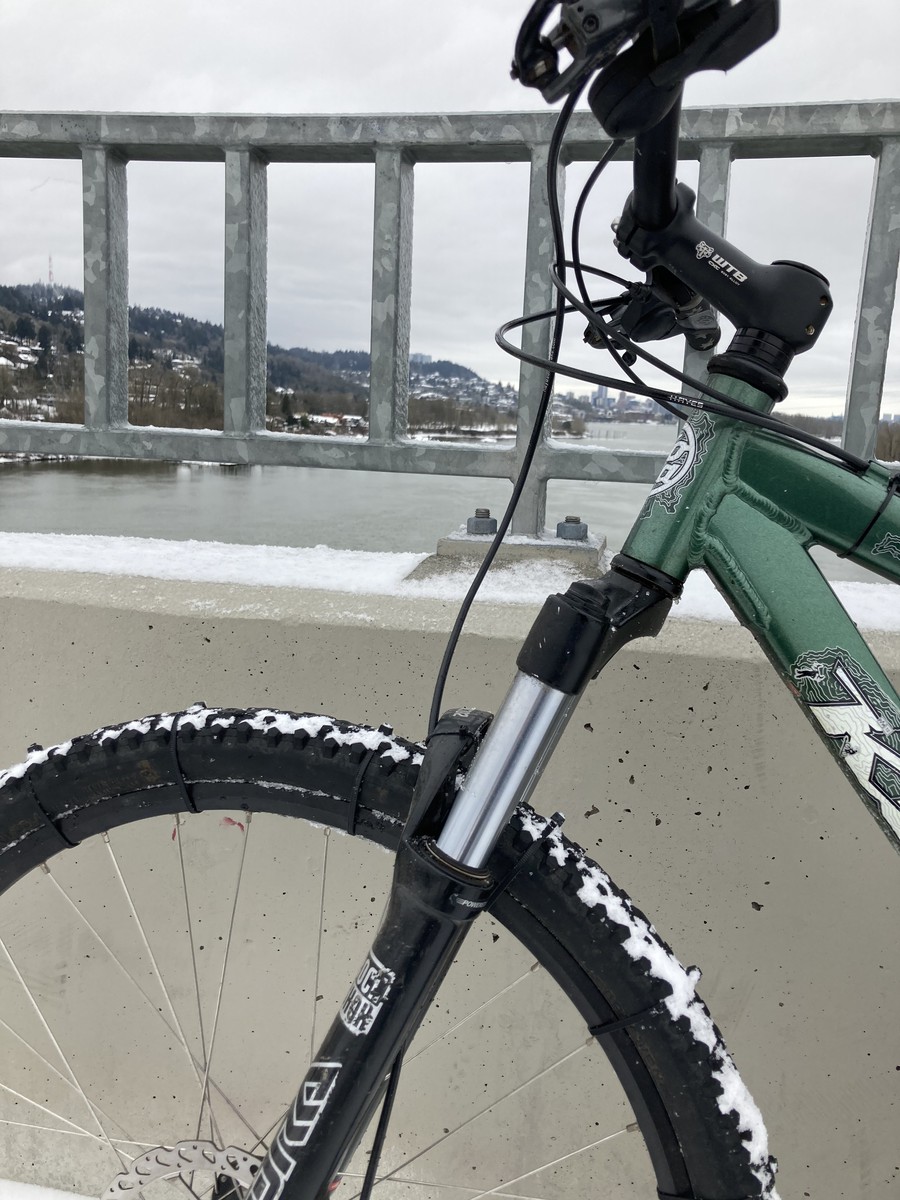 The dog was loving it. 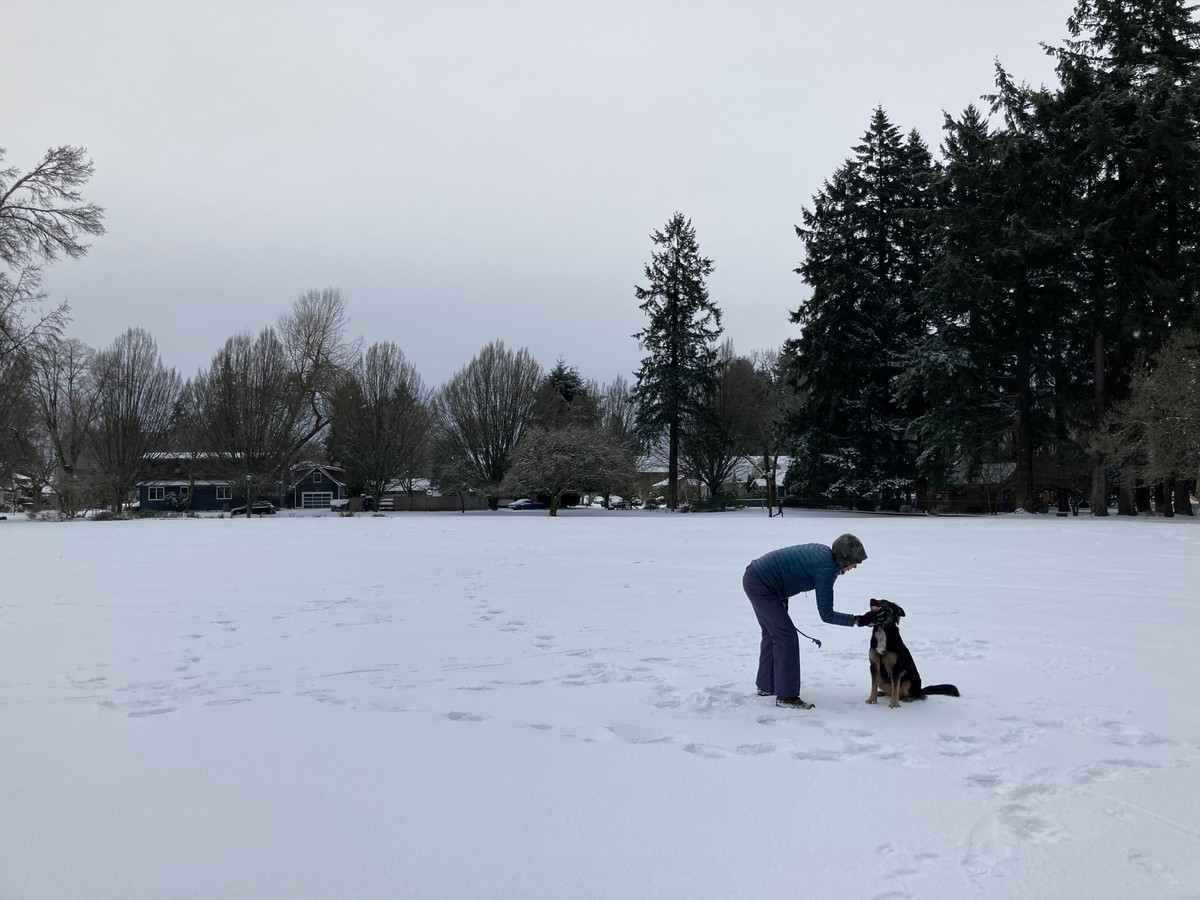 Some people we already experiencing power outages but that wasn’t us.

It half-melted, half-froze on Sunday — the usual Portland winter stuff. The dog was still loving it. 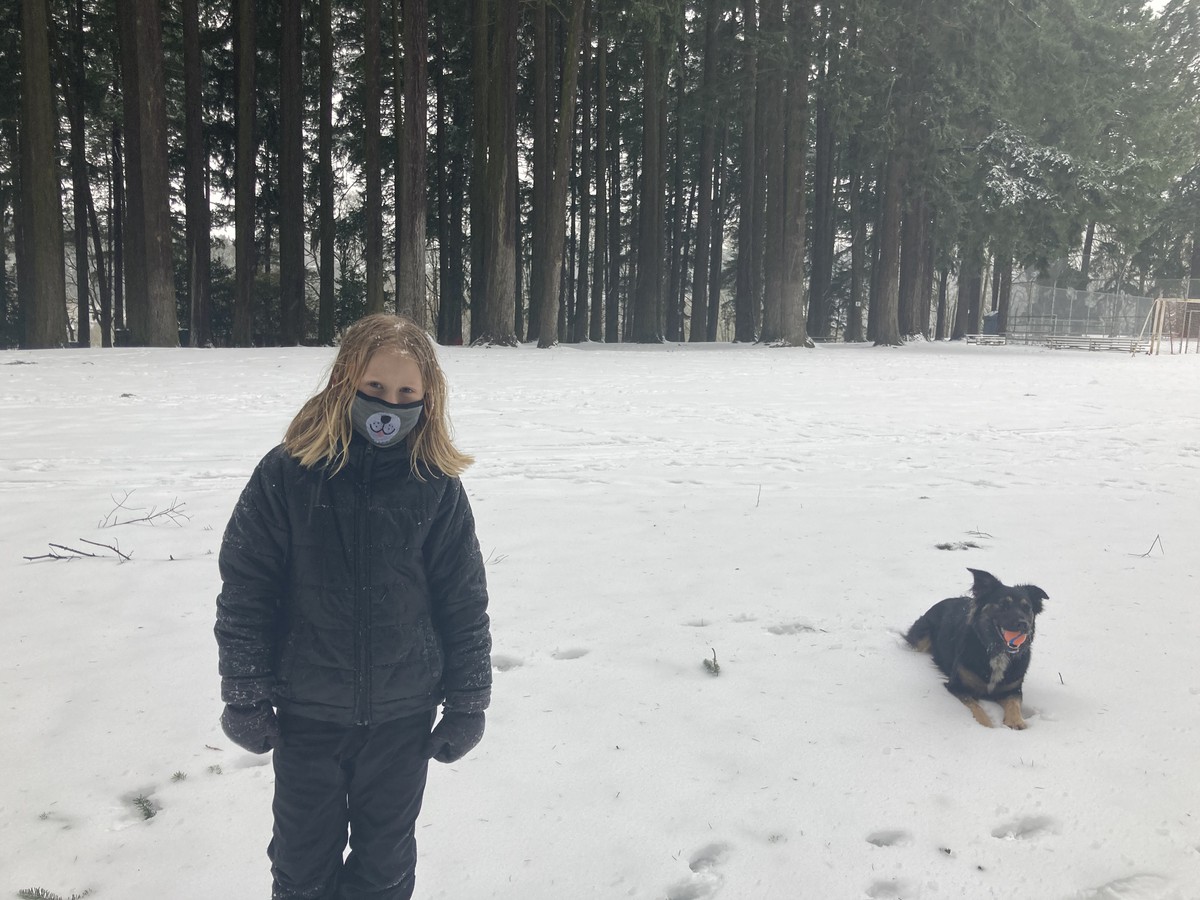 Sunday evening was when our power outage hit. We have a gas range so we could get warm water bottles in the aquarium & lizard cage. After a bit of fiddling we figured out how to light the gas fireplace. Our phones were charged and we had some backup batteries. It was a pretty cozy catastrophe, except for the weird thing where cel data was nonexistent and cel service was spotty. 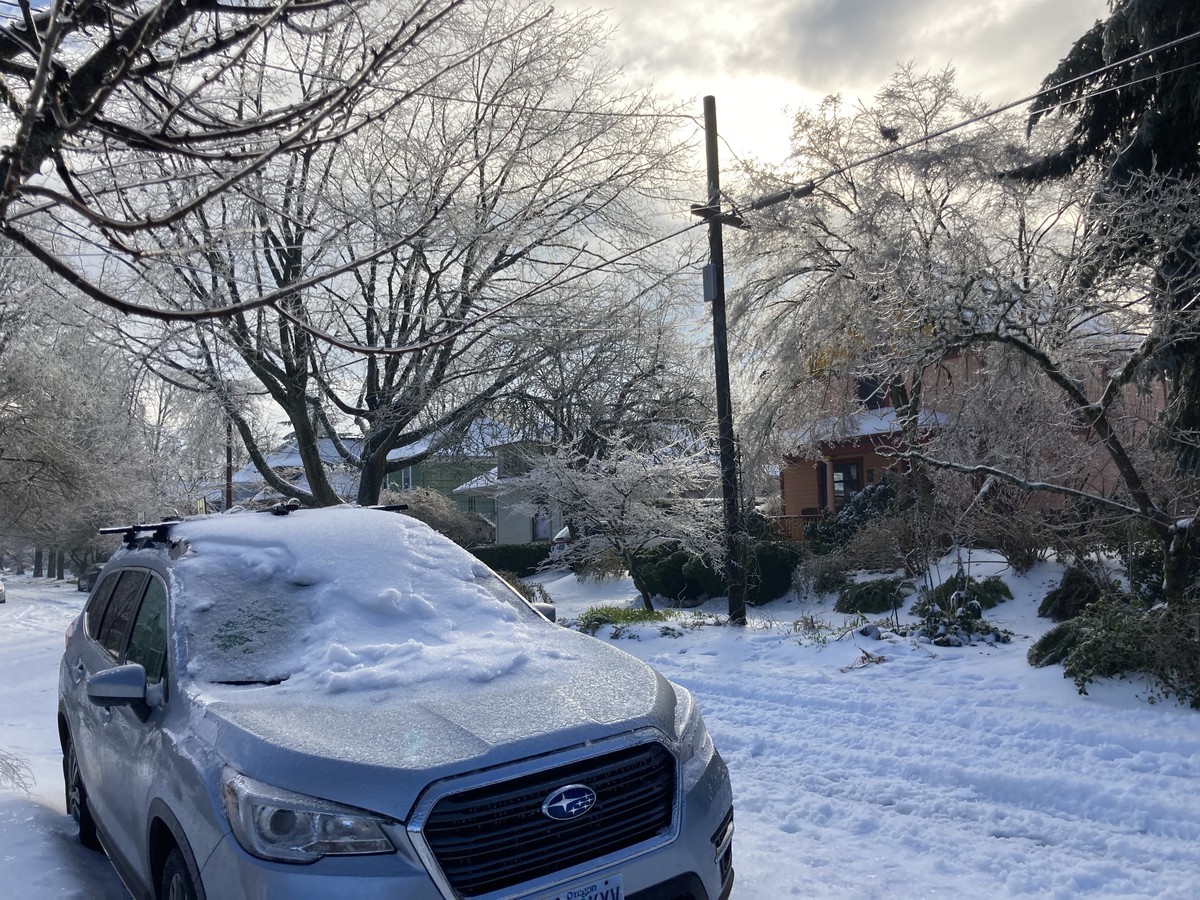 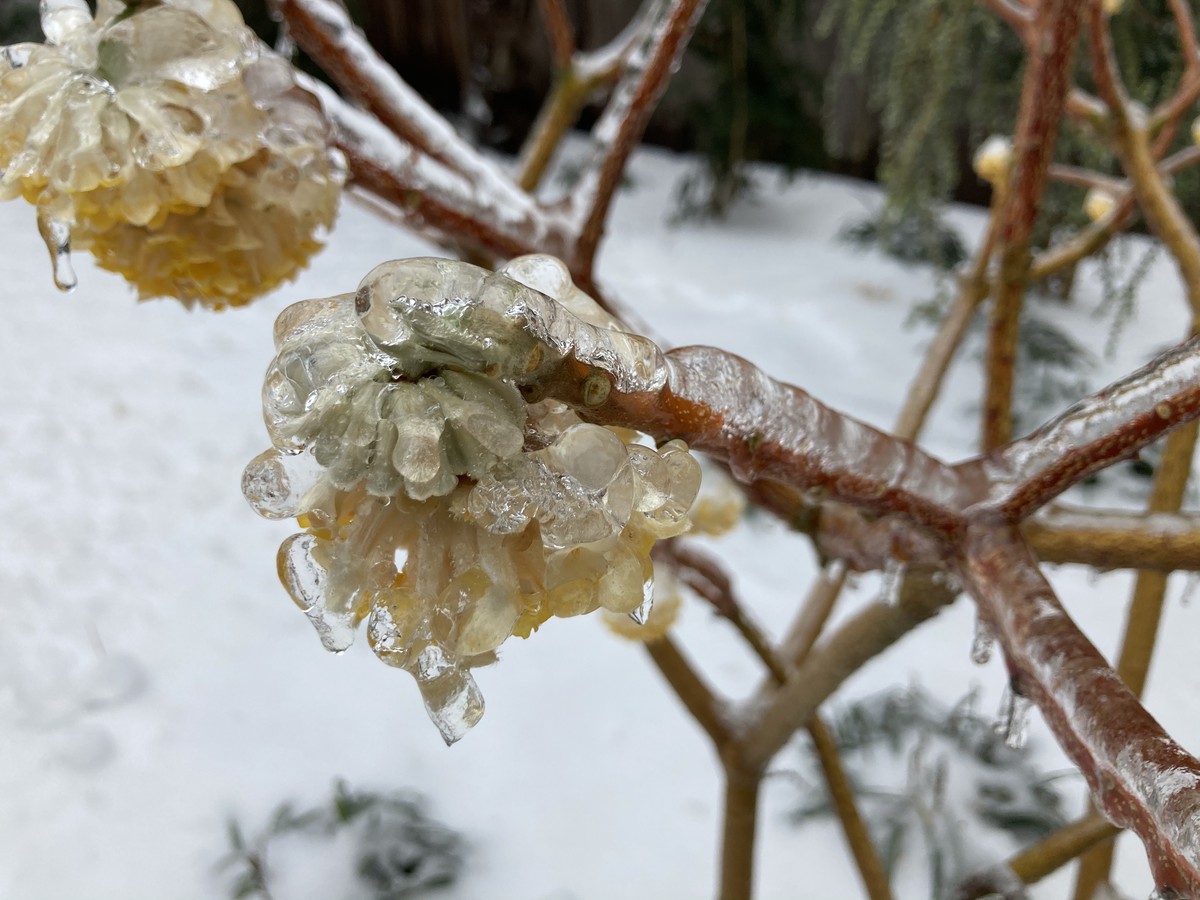 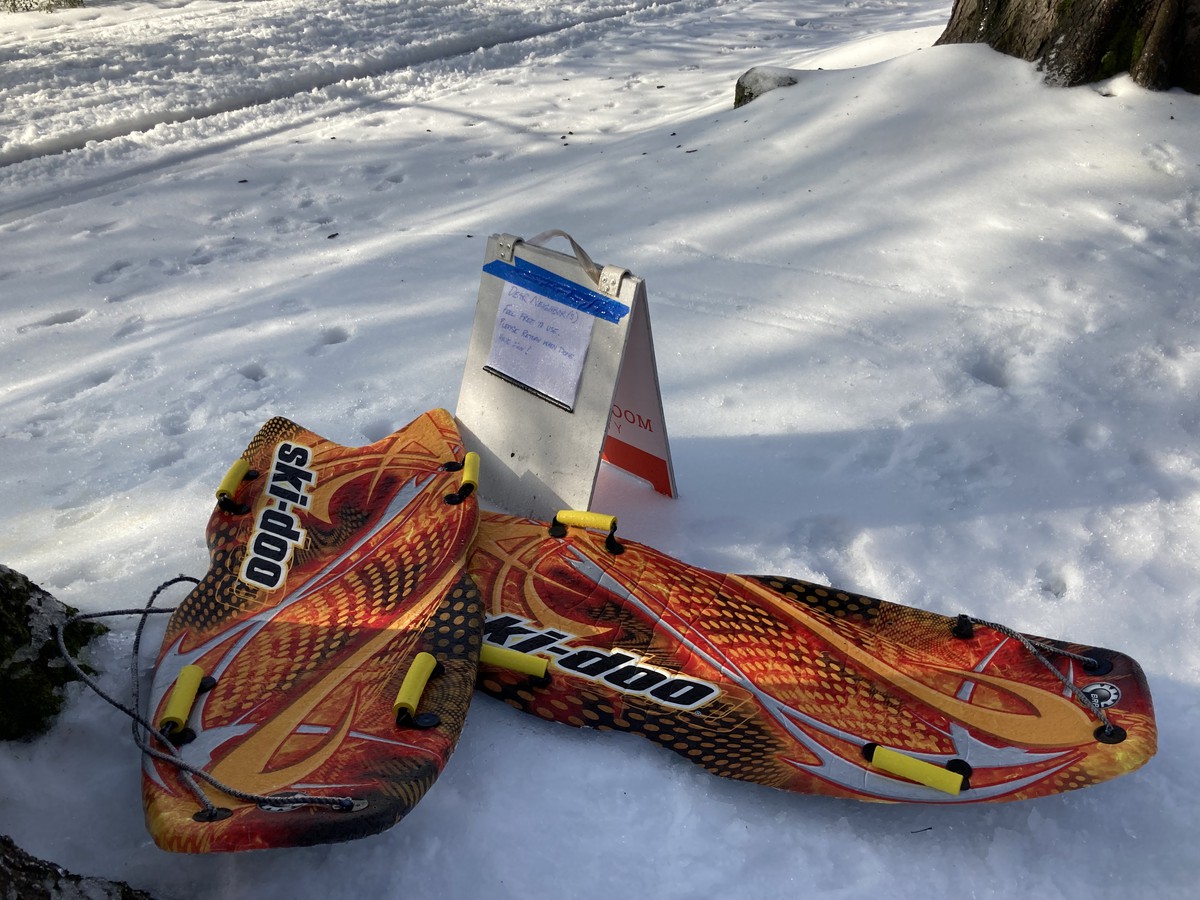 The dog was still loving it. 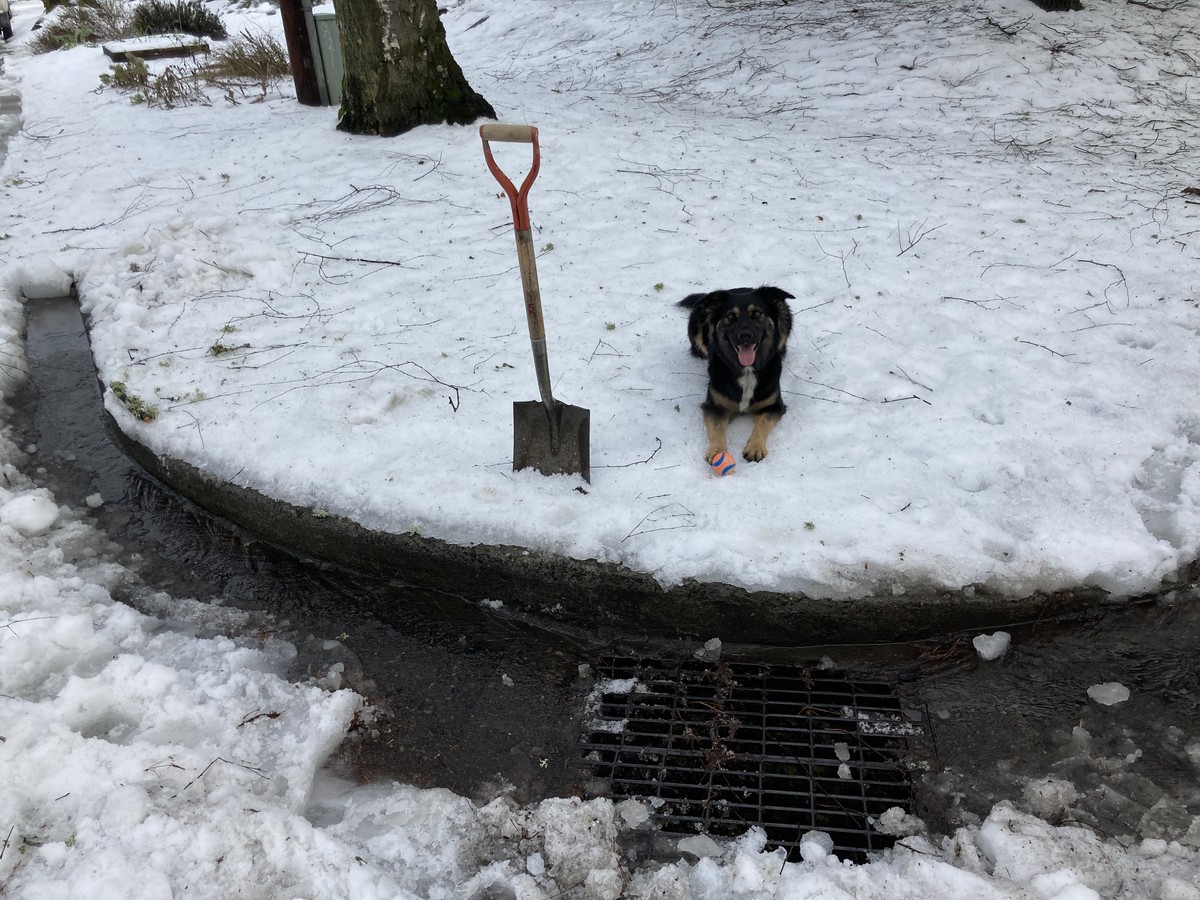 Monday night we cooked up the most expensive things in the freezer (salmon, mostly). The house had warmed to the mid-60s; I spent the night near the fireplace in case something caught fire or the carbon monoxide alarm went off.

Tuesday…we were losing it a little. I made the neighborhood rounds but it was getting tired. I tried to cook up the less-expensive frozen foods (bacon, mostly), but this had the effect mainly of making the house smell like burnt bacon. We are almost all vegetarians in this house BTW. I don’t know why I did this; we had plenty of pasta, rice, oatmeal, and canned foods. And most of the refrigerated things were perfectly content to sit outside on the back porch in the snow. We could have fed ourselves for weeks on that. It was not necessary even once to open the freezer. 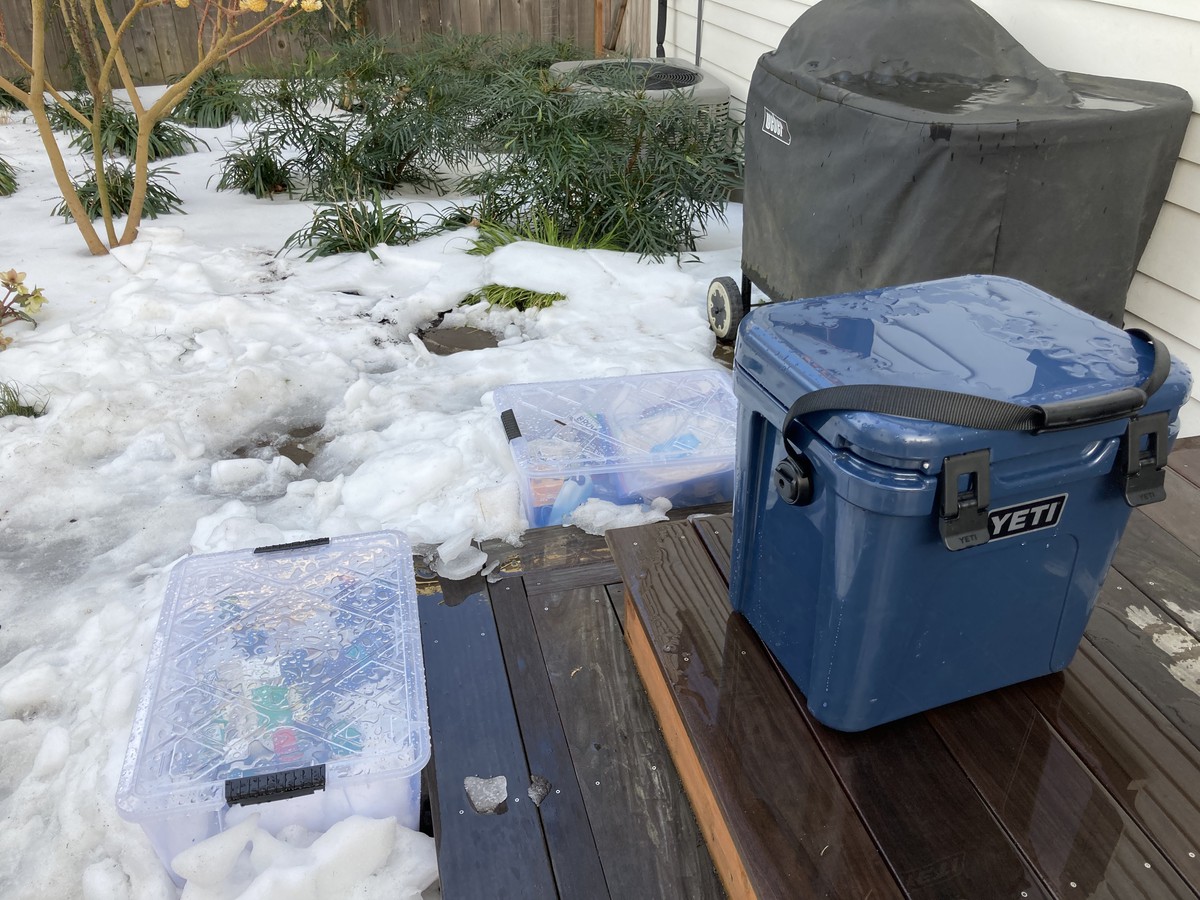 Despite being well stocked, in the afternoon we made some trips. Just for the sake of looking at something different. A trip to QFC which somehow retained power throughout. Then we bundled into the car — yes, including the dog — just to get gas and charge our phones. 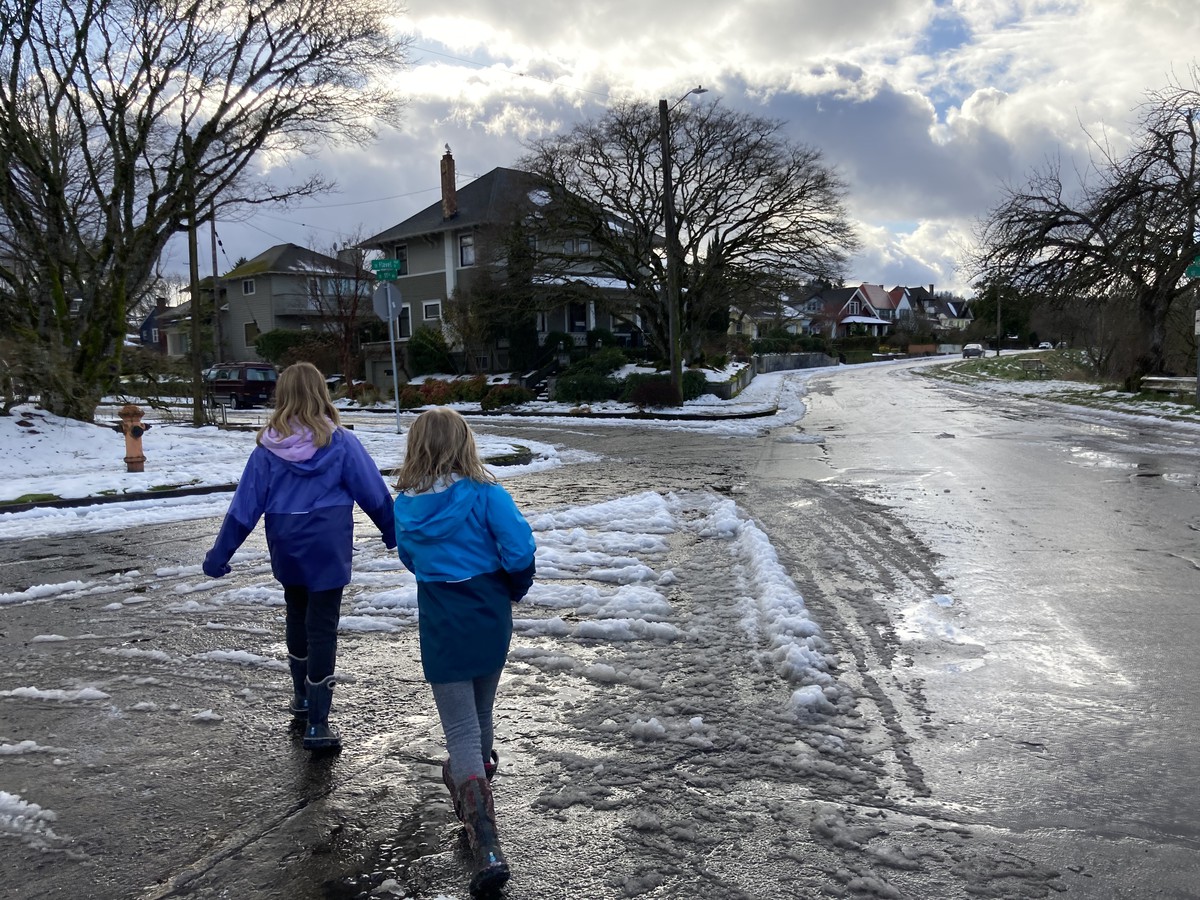 The dog. Was still. Loving. It.

Last night we finally got power again. Cleaned out the fridge, cleaned up the greasy kitchen, laundry, hot showers, civilization. We ate the last edible thing in the freezer: pizza.