The theme for today is suffering. Even by the generous standards of cyclocross, Het Meer is about suffering. Long runups through deep beach sand, endos into the sand, long gravel straightaways that reward wattage, dust and grit that freezes pedal cleats and shifter cables.

With a points callup from David Douglas I staged Top 10. By the end of the first lap, I had slipped half a dozen places or so. By the end of the third lap I’d have been lucky to be in the top 20. I started to defeat myself mentally and put myself in a “finishing not winning” mindset.

Still. In the runup off the beach on Lap 4 I noticed myself passing guys who’d passed me a lap or two back, and they didn’t catch me again on the straightaway. I was wearing down my closest competitors. This fits with my usual “if only the race were one lap longer” strategy.

But. On the weird two-and-a-half rising switchbacks just after the lap line, I overshot the second switchback…or something, my memory is hazy…and slid and/or tipped over the lip of the big firepit ring at the top of that little hillock. (This description will probably only make sense to someone who’s actually seen the venue.) I somehow inverted and came down on my left side and shoulder, with the bike twisted about 90° under me, but still clipped in. My cleats were completely frozen and I was really foggy. Stabbing pain in my left shin, ankle, and knee; lots of blood. I shook myself hard, lost a dozen places and wobbled back onto the course.

I had no power left in my left leg but could turn the pedals, kind of. (I couldn’t put any weight on that leg at all so running was out.) My motto is DFL before DNF. On the first moderately technical hairpin I undershot the corner, couldn’t unclip (again) and wound up under my bike. Then I called it quits. My knee was too weak to run the bike and I didn’t want to risk serious damage literally two days before the baby arrives.

So: DNF. I’m not proud but it was the right thing to do given the information at hand.

I had about an hour or so where I feared knee damage but I’ve since moved around a lot on that leg and it’s, I dunno, OK? My right hip took a hard wrench in those falls too, and a big oozy scrape on my left shin that I for the life of me can’t imagine how I got in that first fall. On the rocks, maybe?

I’m a little worried about pushing so hard, so early in the season (when accidents are more serious, because the ground isn’t muddy yet). There’s a good strategic reason for doing so: I can build points for a callup at Cross Crusade #1 in October. But I had a moment today where I imagined being laid up with broken bones or torn ligaments in what will surely be one of the hardest weeks of my life. I expressed this worry to Jenny and her response was (paraphrasing here): “well you can putz out if you want, I guess, but I think you should push through.” 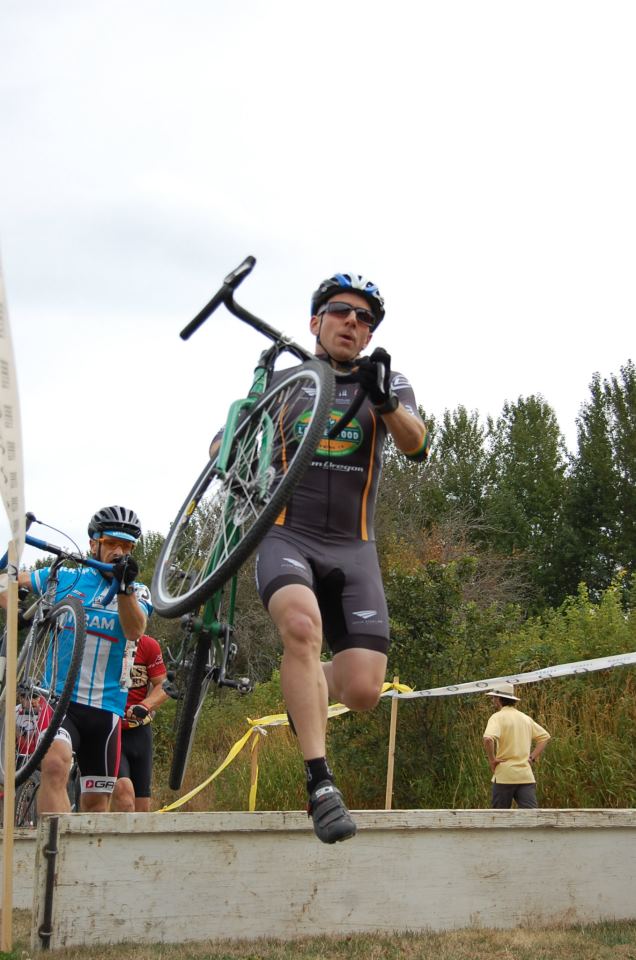 And I thought Het Meer was bad. Zaandercross was twice as bad. Even where the ground wasn’t sand, it was sand. Under the grass: sand....

A good day, tons of fun and not a bad race for me. You could read last year’s report to get a feel, the course...

Briefly: a fantastic race, easily one of my strongest ever. Conditions about like last year: dry and dusty. First ’cross race on the Gunnar, which...