Winter Cross was muddy, chaotic, slippy, flat out climbing fun. This was classic Pacific Northwest Cyclocross, right down to the beer sponsor. Just spectating the race got me soaking wet and filthy with mud. I shook dirt out of my underwear when I got home.

Of course, my second-place finish (of 51) made this extra super fun. This might put me in about 3rd to 5th place in series standings, but those haven’t been released yet.

AND If I’ve done my math right, this finish takes me to exactly 20 upgrade points. Which means: my last-ever race as a Cat C. With only two or three races left on the calendar, I was already considering ending my season; maybe go out on top?

But tempting as it is to write a season recap, I’ll try to stick to Winter Cross here.

Was spitting rain, warm(ish) but windy and turning cooler later in the day. Perfect ’cross weather! My family didn’t attend, so Thom chauffered me (as usual) ... and as usual Thom wanted to preview the course which meant leaving Portland before 7am.

Brilliant. Just enough climbing and sprinting to favor the riders (like myself), but really a technical course rewarding good handling and nerves of steel. Nearly every imaginable surface available: a small strip of pavement, well-graded gravel, footpath gravel, thick/slippery gumbo mud, stream crossings, rocks, grass. The course ends on an uphill sprint, which Ninkrossi and Rainier have both taught me is the best kind of finish (and the best kind of sprint!). The rain + terrain made this a classic Man vs. God race. Beating 49 other guys was secondary to putting everything I had into the terrain.

I had second-place staging so in a sense the race was all about holding my start. But as usual a dozen or so racers (including Thom and Tom Palke, another reliable nemesis) shot past me on the starting sprint (which is level to flat). I passed most of that knot in the first series of chicanes, putting myself in about 7th to 10th. Terry Campbell pulled pretty decisively into the lead, but tantilizingly close for the first Lap. So of course on Lap 1 I made three spectacular spills on the easiest terrain imaginable, overcooking through turns. Trying to catch Terry.

I never did catch Terry

He pulled into a decisive lead, and by mid-Lap 2 I opened a gap over T(h)om and the rest of the field. I cooled my jets re: Terry and think my way through the hard parts. Having no one chasing me and no one to chase, I had the luxury of being careful. This was probably a smart tactic on my part.

For example, I never did find a clean line through The Pit — a gnarly “stream crossing” that rapidly became “bottomless morass.” I wiggled and banged and dabbed my way across every lap but never crashed. So: I didn’t gain a ton of time, but by dint of not crashing I gained time in aggregate against the entire field.

(Which is not to say I didn’t slip. A lot. Especially around the moto course, which was a particularly wonderful kind of gumbo. But after Lap 1, I never went down again.)

Finally, the course allowed me to apply my “never sprint, never recover” strategy to good effect. The moto course forced some recovery-grade efforts, but everywhere else I could hover just under my redline. I rode all season without a HRM; yesterday was the first race where I wish I could quantify my effort. I ended hard but did I really leave it all out there? Campbell was waaaaay ahead of me — he ran the last sprint with a flat — so first place was maybe not in the cards. But without numbers, who knows?

Last week I quietly decided to cut way back on both alcohol and caffeine, in an attempt to hack my sleep cycle. I’ve been drinking tea occasionally — maybe 2–3 cups a day — but quit coffee altogether. (The effect is that I am always sleepy but also better rested.)

Saturday afternoon I decided I would have one cup of pre-race coffee as an upper, and then enjoy a post-race beer. The coffee decision worked well. My legs acquired a kind of nervy snap and I just felt a general elevation of energy. But that postride beer didn’t sit well, I felt hung over and woozy all afternoon. 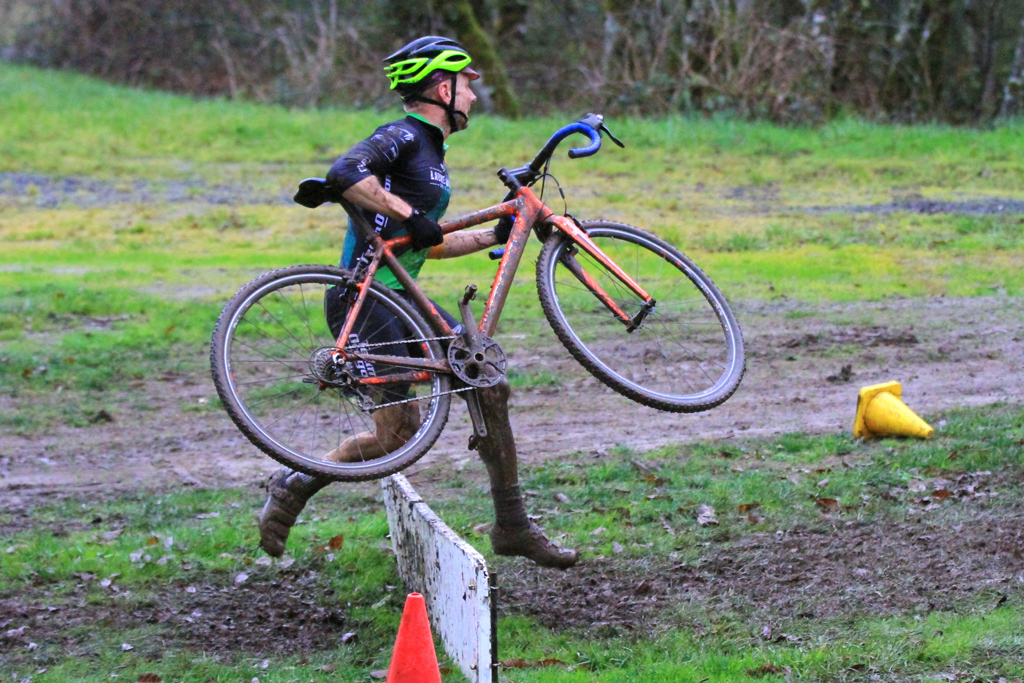 TL;DR: First ever race in Category B. Inauspicious but not embarassing finish. 27 of 50. Not too much to say here. Weather started cool, rain...

I planned so well for this race. I calculated that, depending on the field size, I would need only a 10th to 15th place finish...

I am so glad Jenny and Thom talked me into racing this. I was going to skip it: too much work, no callup, and a...