Chris and I switched (downgraded?) to Master’s C. The Good: we are now racing against Guys Like Us (i.e. old men). The Bad: I don’t get to make any more excuses like “well of course I placed 20 of 40, I’m racing against 24-year-olds.” The Ugly: The field size was ninety-eight. I think half of all people racing at Barlow were second-year racers over the age of 35. I am clearly not the only guy having this midlife crisis.

I didn’t warm up and I didn’t get a full preview lap. So I started cold and kind of clueless. In fact, I never figured out the course; every lap was full of surprises. Chris and I staged about 3/4 back and the first lap would have served me well in both these regards except for my first spectacular crash. On a long stretch of pavement with two hard turns in succession, I tried to pass a guy. I gave him a friendly “I’m inside your line” and he yielded not at all. (Which is fair enough I suppose but pretty un-Cat-C cyclocrossy.) Somehow we crossed wheels, somehow I went down, and I banged up my left side (why is it always the left?). This is a spectator-rich corner (near the finish and parking lot) so I had a lot of people yelling “get back up, go get that guy.” At this point Chris and about a dozen other riders passed me, I remounted pronto and resumed pretty seamlessly. This was my first serious crash racing ’cross — and I crash at least once every race — but by the race’s end it was not my most serious crash.

I dumped out all my fuel on my first two passes through the infamous Tiger Pit — a steep drop into a stream bottom, prefaced by two barriers, out of which you climb by way of a railroad-tie staircase. Here’s Chris climbing out of the Tiger Pit: 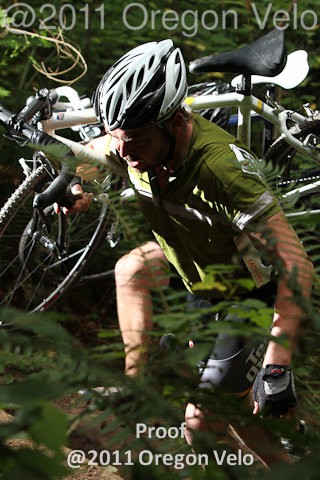 The pit was brutal on me. I poured everything into it and still had to climb literally on my hands and knees up the last two steps. After doing this twice I noticed all the other guys were doing the same thing, and spent the next quarter-lap recovering. So on my last three laps I took the Tiger Pit nice and slow, remounted early, and spent five minutes picking off the guys who burned it all up looking macho for the hordes of screaming spectators. (Did I mention: the Tiger Pit is lined with screaming spectators? Very ThunderDome.)

On my fourth lap I had my second spectacular crash, easily my worst ’cross racing crash ever. I came into a barrier too fast and didn’t lift my wheel high enough to clear. Exactly like the “Joey’s All Right” video making the rounds last week:

Except much, much slower. I somehow threw my body (and bike) into the barrier, with great pain. Again, this is a heavily spectated section and with great encouragement from the crowd I hopped right back on the bike, crazy bent handlebars and all. I spent the last two laps in an adrenaline funk, they were probably my fastest laps and I picked off a dozen or more guys. I played leapfrog with a guy in blue kit for the last lap, when I passed him he gave me a really rousing “good for you!” That’s the Cat-C Cyclocrossy spirit that keeps me coming back week after week. I make a point, while I’m racing, of calling out my heroes, like the guy who ported his broken-down bike at least a full lap for the last 20 minutes of this race.

Photo: tyarnellphotography Even less to report than usual this week despite this being my third-best race ever by percentile finish. 11 of 163, and I’m...

I remembered Barlow as one of my favorite races last year, also one of my bloodiest (two bad-ish crashes with lots of bike damage.) My...