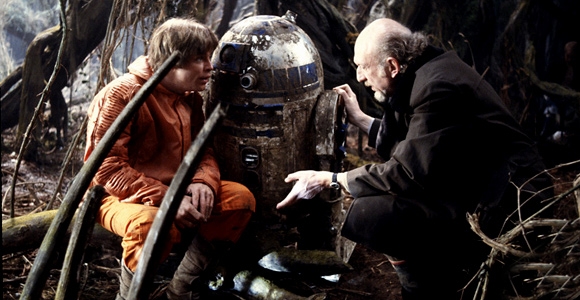 Hammill, Baker, and Kershner are covered in muck. On a set. In the actual physical universe. Quaintly, they are discussing a scene where a farmboy pilot and his pet robot are searching a haunted swamp for a zen chihuahua muppet to teach them space kung fu. And they made it BELIEVABLE.

They worked with what they had, which in 2013 Movie Dollars was approximately a middle-school Christmas play. The trees were made of wood. The robot was made of metal. The aliens were made of rubber. The mud was made of water and dirt. Anything that moved had a person inside it. None of it was made in a computer. All they had to work with was: atoms, gravity, optics, and each other. They had to collaboratively think their way through this ridiculous story about magic outer space empires.

I could go on a loooong time about this photo and its awesomeness.

(Photo: 66 Behind the Scenes Pics from THE EMPIRE STRIKES BACK)

This article is timely:

Orson Welles was once quoted as saying the absence of limitations is the enemy of all art, and if you use limitations to your advantage, you can get great results.

Some Random Thoughts About Star Wars

This video (thanks, Scott) set me to thinking a little bit about Star Wars:I first saw Star Wars 31 years ago. A friend of the...

A team of astronomers have observed, over the last 18months, a system of seven Earthlike planets orbiting the tiny red dwarf TRAPPIST-1. All of them...

Hey let’s SPOILER TALK about the new Big Space Battle Movie! It's interesting to compare Rey with Finn. They are clearly the hero duo and...