Today is the first day of summer. This doesn’t mean the same thing in Oregon as it does in my native Nebraska. 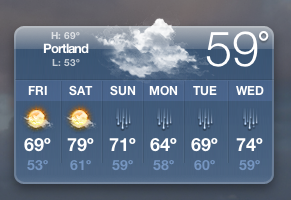 My first spring in Oregon, I couldn’t wait for “winter” to be over. I thought “gray” meant “winter” and there would come a week where “gray” just didn't happen any more, until maybe October. This is kind of how Nebraska weather works: it’s cold in the winter for roughly three continuous months, then it’s warmer and wetter in the spring for about as long and then hey presto! it’s summer for three glorious, sweaty months.

My first Oregon spring, seventeen years ago, an older friend and Oregon native explained weather here as happening in “cycles.” It’s like this:

There are two basic weather modes: GrayWet and BlueDry. They happen in succession: GrayWet follows BlueDry follows GrayWet, continously and forever. No matter what timescale you observe, GrayWet will follow BlueDry over and over again. The only things that change are the length of the cycles (are the GrayWets getting longer or shorter?) and the temperature (are the GrayWets getting colder or warmer?). (The temperature variations are almost nada, to a midwesterner. It is always spring here, temperature-wise.)

Beginning in October, the GrayWets get longer and the BlueDries get shorter. By late November you will experience a GrayWet cycle that lasts 30 days or more. But sure as day follows night, a BlueDry will happen. It might only be a day or two long — heck it might only be an afternoon — but it will happen.

But beginning in April, the GrayWets get shorter and the BlueDries get longer. This year we had about two solid weeks of BlueDry in late April/early May. This is what makes Oregon summers so tough. By the time of the Solstice, we’ve usually had at least one long BlueDry period, so transplants like me are thinking, “hey, it’s summer now, right? Just like Nebraska?” But remember the Iron Law of Oregon Weather: this cycle will end eventually. Anyway, by mid July or so, we’ll have a BlueDry cycle that lasts for a month or more.

Of course, this means that in the rapid-changey months, the cycles might be hours long.

So this is the way I’ve thought about weather for 17 years now.

The rains have started.I like this. This is why I moved to Oregon. I moved here for the cool and gray and damp and peaceful....

Why I moved to Oregon

I came here for the gray and wet and chilly

Jenny and I ran in the Xiamen International Marathon yesterday. I ran 10K and Jenny ran the half marathon. Altogether it was a good day....