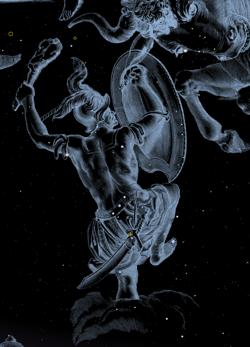 While dumping a bucket of compost at 5am this morning I looked to the southeast and saw my son’s namesake rising ahead of the sun.

Orion is a lot of people’s favorite constellation. Almost everyone knows it from the bright stars in the belt, and it’s visible from most places on Earth. It has a nifty nebula and lots of bright stars. In the northern hemisphere’s fall, Orion is visible in the early mornings to the west of the sun. The sun falls gradually behind it, and Orion rises earlier and earlier. By midwinter it’s at the zenith in late evening hours.

The character Orion is usually depicted as facing away from the Earth, with a club in his left hand overhead and a lion skin hanging from his right arm (stretched before his body). My astronomy software shows him holding a shield in his right hand, which I’d never seen anywhere else. I always pictured Orion shooting a bow left-handed (the way I shoot a bow), stretching the string from behind his ear, like a samurai. From Orion’s famous belt (the three bright stars Mintaka, Alnilam, and Zeta Orionis) hangs a sword. At the end of the sword is the purple Great Nebula of Orion, M42. He faces Taurus the bull, and is backed up by two hunting dogs (the Canises Major and Minor). They are all standing, with a motley menagerie of other sky animals, at the river Eridanus.

As a kid fascinated by astronomy (and a lifelong insomniac), I spent a lot of time outside looking at Orion in the winter. This was easier in the dry Nebraska winters than the rainy Oregon kind. My father would drive me to the ridge north of our house, with a thermos of cocoa, where we’d stargaze with a pair of binoculars. Because we’d do this in the winter, we always found Orion, and the Great Nebula made a good target for the binocs.

Decades later, living in northwest Portland (and just before meeting Jenny), I would get up early to ride my bike up Montgomery and do laps on Fairmount drive. On clear mornings, at certain points of the road, I could pick out Orion’s belt and sword through the trees.

The constellation Orion is like an old friend — I always know where to find Orion, at any time of day, at any time of the year, because he rises just ahead of the sun on my birthday. I can find a lot of things in the sky by finding Orion first — the Hyades and Pleiades in Taurus, Gemini over his left shoulder, and the really bright star Sirius in Canis Major behind his left heel.

When we were in Bali, one sweltering night in Padang Bai I stepped outside for fresh air. On the equator, with no cities nearby, the sky was ablaze with unfamiliar stars. (The southern stars are much brighter than the northern ones, because the south pole points toward the center of the galaxy.) I looked all over the northern sky for Orion’s belt, but it was probably too late and Orion had set. Eventually I made out Leo and had the disorienting sensation of seeing it upside down. Which had the secondary effect of making east and west reverse themselves.

The name Orion was actually Jenny’s idea, but once she said it, it shot to the top of my list. A few people have suggested, either coarsely and in jest or gently but seriously, that it’s kind of a weird name. We wanted a nature name (like “Clay” or “River”), an unusual name (hopefully he won’t have to go by “Orion S.” to distinguish himself from some other Orion in his third grade class), and a name that had some personal significance for us.

At the moment of his birth, we hadn’t chosen a name from the list of finalists. But the anaesthesiologist asked, “do you have a name picked out?” and we both answered “Orion.” A hunter in the sky with two dogs, staring down a bull on the banks of the river Eridanus.

💚 Delivered at the Merna Community Cemetery, July 2nd, 2015 Dad was not a Churchy man and while he liked to discuss religion, he didn’t often...

I grew up with skies outside of cities which are the skies most people in most of history grew up with. At the cabin there...

A team of astronomers have observed, over the last 18months, a system of seven Earthlike planets orbiting the tiny red dwarf TRAPPIST-1. All of them...