I watched some of Katie Couric’s recent interview with Sarah Palin just now, and I had a sudden aha moment. I had previously seen some clips of Palin interviewed by Charlie Gibson and Sean Hannity, and had a weird sense of deja vu that I just couldn’t put my finger on. But when Palin squirmed around the question about Rick Davis (she even repeated herself: “well, here’s the answer I’ve prepared. Oh, you want a clarification? Allow me to repeat the answer I’ve prepared.”), it suddenly came flooding back to me. Sarah Palin 2008 reminds me of George W. Bush 2000. 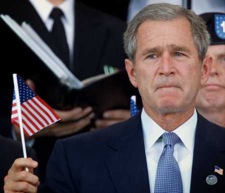 Let me explain: in the 2000 elections, especially in the Republican primaries, poor Dubya just got a merciless drubbing. Remember when he was on Larry King with John McCain? Ouch, that was painful. I want to be clear: I don’t think he did so badly because he was stupid so much as he didn’t really want to be president. The signature Dubya 2000 look was this deer-caught-in-headlights stare which made me think a) he was kind of out of his element and b) someone had talked him into running for president.

Imagine yourself in Bush’s (or Palin’s) shoes. You’re a moderately competent politician in a state where politicians don’t need to work very hard. You’re doing OK and thinking, “hey, in a few years this politics stuff might lead somewhere.” You get a call — from the RNC or the current Republican presidential nominee, perhaps — and the guy on the other end says, “listen, we think you’re [vice] president material. Do you want to run for [vice] president?” Suddenly, “a few years” is “right now” and “somewhere” is “right here.” It would have to be really flattering. And no matter what your own opinion of your own abilities, or even your actual desire to be [vice] president, would you say no? Seriously? Some important-type guy from the national office just offered you the [vice] presidency! Maybe you’re actually way ahead of the curve here!

After a few weeks though, of people asking you tricky questions about your campaign finance manager or your opinions about countries you’ve never heard of, it starts to sink in: even if you make it through the campaign — which sucks — you’re gonna be [vice] president — which would probably suck even more.

I remember watching Dubya’s inauguration in 2001 and thinking, “whoa, this guy has already checked out.” Why do you think he takes so many vacations? It’s not because he’s lazy. It’s because he hates his job1 but he can’t quit. For most of the last eight years, for all that I’ve disagreed with his policies and style of governance, the primary emotion I’ve felt for George W. Bush has been pity. He got his job through connections, he hasn’t been very good at it, he can’t quit, and he’s only really wanted it maybe 15 or 20 months out of the last eight years.

Which brings me back to Sarah Palin.

People who really, really want a job, even a job they might be unqualified to do, try a lot harder than Palin is trying right now. They try so hard they screw up and say things they shouldn’t have. They depart from their prepared responses. They ad lib. They take every opportunity to prove how much they want the job, even if they can’t prove they’re capable of doing it. She’s not-trying so hard that she’s basically anti-trying. You could make a case that the McCain campaign is shielding her, but again I return to: if she really wanted this job, she’d be all over the media like stink on a monkey. You might also argue that she’s just avoiding the press because they’re so hostile, to which I would reply (again): if she really wanted this job, she’d be begging to get back on top of the news cycle.2 This is what John McCain does every day with his latest wacky stunt.

1 That is to say, he hated it in early 2000. I think after September 11, 2001, he was really loving the job — which showed in his performance in the 2004 elections. After that election, though, he kind of checked out again, especially after the Harriet Miers and Katrina stuff, which was like ultra-boring president-job stuff, not ultra-cool Commander-in-Chief stuff.

2 And also: are you freaking nuts? She’s given three interviews to Charlie Gibson (slow pitch), Katie Couric (whiffle ball), and Sean Frickin Hannity (T-Ball). Oh, and People magazine (I think.) This is not the hostile press. Crap, McCain went on the View and Obama went on O’Reilly. They went willingly and gladly into the freaking lion’s den because they really want the job of president.

Now that the election’s over: Politics!

Couple thoughts I’ve been sitting on through this election.First: if ever there were an election where I could’ve been persuaded to vote Republican, this was...